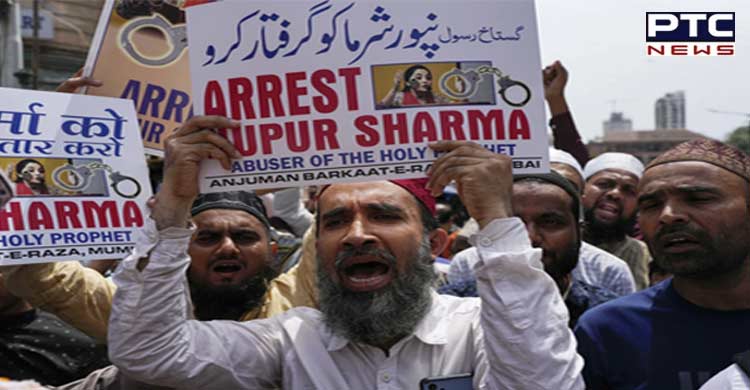 New Delhi, June 7: Even as the Indian Government tried to defuse the anger in various countries, the diplomatic outrage over the controversial remarks on Prophet Muhammad by BJP leaders Nupur Sharma and Naveen Kumar Jindal continues.

At least 15 nations, including Iran, Iraq, Qatar, Kuwait, Saudi Arabia, Oman, the UAE, Iran, Jordan, Bahrain, Maldives, Libya, Indonesia and Afghanistan have staged official protests against India. The countries condemned and denounced insults to the Prophet Muhammad and sought an apology from the government.

Meanwhile, ​at home, the opposition parties have increased pressure on the Centre, calling for legal action against the two BJP leaders. The opposition has also accused the ruling BJP of denting the country's image at the international level.

Providing clarity on the matter, the foreign ministry of India issued a statement and said that the offensive tweets and comments "did not, in any way, reflect the views of the government. These are the views of fringe elements".

The BJP, on the other hand, suspended spokesperson Nupur Sharma and expelled Naveen Jindal over their controversial comments on Sunday. The party also issued a statement and asserted it is "strongly against any ideology which insults or demeans any sect or religion" and "does not promote such people or philosophy".

Following this, Bahrain's foreign affairs ministry welcomed the decision of the BJP to suspend those leaders and highlighted "the need to denounce any reprehensible insults against the Prophet Muhammad PBUH, as a provocation to Muslims' feelings and incitement to religious hatred."

The ministry further stressed "the importance of respecting all religious beliefs, symbols, and personalities, and the concerted efforts of the international community to spread the values of moderation, tolerance, and dialogue between religions and civilizations, and to confront extremist ideas that feed sedition and religious, sectarian, or racial hatred."

"The Islamic Emirate of Afghanistan strongly condemns the use of derogatory words against the Prophet of Islam (Peace be upon him) by an official of the ruling party in India," government Spokesperson Zabihullah Mujahid was quoted saying by the media outlet.

"We urge the Indian government not to allow such fanatics to insult the holy religion of Islam and provoke the feelings of Muslims," he added.

Furthermore, Qatar, Iran and Kuwait on Sunday summoned Indian ambassadors to express their strong protest and condemnation of the remarks.

The controversial remarks by the BJP leaders also sparked a row on social media in various countries, calling for a boycott of Indian products.

Nupur Sharma made controversial remarks against Prophet Mohammad during a news debate on the Gyanvapi issue. Furthermore, Naveen Jindal posted a tweet about the Prophet, which he later deleted.