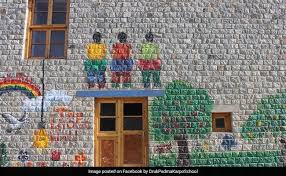 The Druk Padma Karpo School in Leh, which shot to fame after it featured in the Aamir Khan-starrer '3 Idiots', has decided to raze the 'Rancho Wall' and ban entry of tourists as the authorities felt it was becoming a distraction for students.

The wall was shot in a scene when one of the characters, Chatur, tries to urinate on it and gets electrocuted by an ingenious invention of school children. The school later painted it as the 'Rancho Wall' which became a picture spot for tourists.

"The movie gave a lot of publicity to the school and it became a must visit for the tourists visiting Ladakh. However, we realised that the purpose of having a school in the area was getting defeated. Not only students were getting distracted by the tourists  flocking the school but also everyday the campus was being reduced to a litter ground," school principal Stanzin Kunzang told PTI.

"Inspired by the vision of His Holiness the 12th Gyalwang Drukpa, spiritual leader of Ladakh, the school aims to provide modern education for Ladakhi children - an education grounded in their own culture and which could prepare them to lead happy and productive lives," Kunzang said

Set up in 1998 by the Druk Padma Karpo Education Society, the school was partially destroyed in the flash floods and landslides that hit the town in 2010, but was renovated thereafter.

The school has won numerous awards for its architecture, including the best green architecture award, the most environment-friendly building and also the best architecture design award.

At present, there are 719 students in the school, of which 281 are residential students from remote areas of Ladakh, while the rest are day scholars.

"Giving a lot of thought to the structure and design of the school, the building is shaped like a key and promotes education as the key to life. It is environment-friendly with no heaters, even in the severe winter that the region experiences," Kunzang said.

"The buildings are oriented in such a manner that solar heating system keeps the rooms warm. During winters, when there is no sun, the school remains closed," he said.

Affiliated to the Jammu and Kashmir Board of School Education, the school provides education at par with any elite educational institution in the country, Kunzang claimed that the management has opened a branch in Khachhey near Kargil for those who cannot come to the main school and many more branches are proposed as the number of children is steadily increasing.

"All of what was shown in the film does not actually happen here, though we do focus more on projects and activities. We also tried for sometime restricting the entry of tourists during school hours, but later we decided to do away with it," Kunzang said.

As per figures from the Tourism Reception Centre in Leh, there has been a growth of 30 per cent annually in the total tourist arrival after the release of the movie.