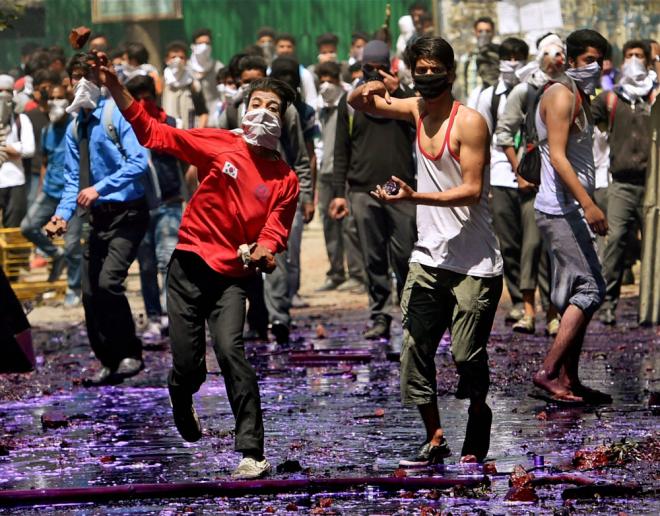 Srinagar: Nearly 300 Whatsapp groups were being used to mobilise stone-pelters in Kashmir to disrupt security forces' operations at encounter sites, of which 90 per cent have been shut down, a police official said today.

Each of these 300 Whatsapp groups had around 250 members, the official said while explaining how determined attempts were being made to disrupt the operations of the security forces by mobilising stone-pelting mobs at the encounter sites.

"We identified the groups and the group administrators, who were called in by police for counselling. We have had a good response to this initiative," he said on the condition of anonymity.

In the last three weeks, more than 90 per cent of these Whatsapp groups have been shut down, the official said.

He said the government's policy of suspending internet services appeared to be showing positive results in curbing stone-pelting during encounters and cited the case of yesterday's encounter in Budgam district.

Just a few youth gathered to hurl stones after two militants were gunned down in the encounter yesterday.

This was in sharp contrast to an encounter in Durbugh village in the same area on March 28, when a large number of stone-pelters had assembled and three of them were killed in firing by security forces.

"With no internet services, the mobilisation of mobs has almost become impossible. Earlier, we would see youth from as far as 10 kilometres from the encounter sites joining the protesters to pelt stones at security forces to disrupt the anti-militancy operations.

"That did not happen yesterday during or after the encounter in the absence of internet on mobiles," the official said.

He said some of the youth listed personal issues like alleged harassment by security forces as reasons for taking to stone-pelting.

"Most of them get carried away momentarily," he said, adding authorities are also looking at further sensitising the personnel on the need to adopt a humane approach while dealing with the youth.

"With the internet facility withdrawn, the activity on these social networking groups and other sites like Facebook has come down drastically," he added.

Stone-pelting on security forces near the encounter sites has been causing major operational problems for the law enforcing agencies over the past one year. More than half a dozen youth have been killed in such incidents in the first quarter of this year.

However, the common people especially those from the business community say they are facing hardships, because of the inability to stay connected online.

"Today, the business depends on internet for communication. I am into stock markets and I have had no business since the mobile internet services were withdrawn on Monday," Mudasir Bhat said.

Bhat said most of the people had done away with landlines and broadband internet services as mobile internet facility gave them more freedom and were also cheaper.

Ishfaq Ahmad, a contractor by profession, said life, without internet, had come to a standstill.

"I had to submit a tender document two days after the internet facility was withdrawn. As the document was to be submitted online, we had to request the concerned department to extend the date till we make arrangements for e-filing," Ahmad said.

He said he has applied for landline connection but the service provider, BSNL, has informed him that it will take time.

"BSNL is the only landline services provider here in Kashmir. I hope the government takes steps to ensure that businesses do not suffer because of this internet ban," he added.