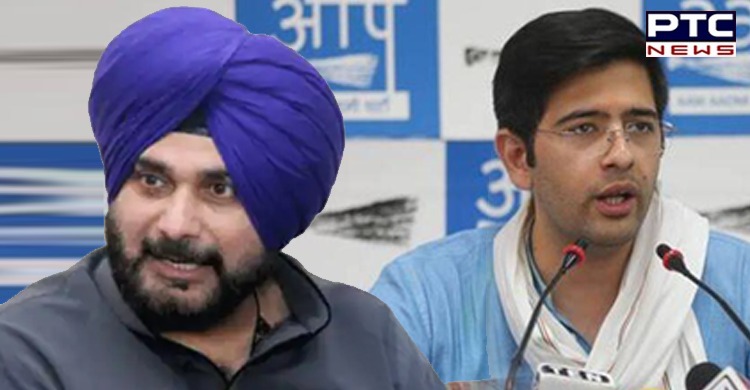 "Sidhu is considered to be the Rakhi Sawant of Punjab politics. He was recently reprimanded and scolded by the Congress high command for his non-stop attacks on Punjab Chief Minister Captain Amarinder Singh. As a result of which Navjot Singh Sidhu today began ranting against Delhi Chief Minister Arvind Kejriwal," he said.

The Rakhi Sawant of Punjab politics -Navjot Singh Sidhu- has received a scolding from Congress high command for non stop rant against Capt. Therefore today,for a change, he went after Arvind Kejriwal. Wait till tomorrow for he shall resume his diatribe against Capt with vehemence https://t.co/9SDr8js8tA

"We just have to wait for a day and Sidhu will resume his diatribes against Captain Amarinder once again. Sidhu's vision is like an unguided missile," said the AAP national spokesperson.
Also read | Patiala: Protesting teachers lathicharged, detained

Earlier in the day, Sidhu, who shared a video on his official Twitter, tweeted, "Exploitation of farmers and decreasing prices even on crops where MSP is announced - Arvind Kejriwal Ji you notified the Private Mandi's central black law! Has it been de-notified or the masquerading is still going on @AamAadmiParty @AAPPunjab."

Later, hitting back at Raghav Chadha after the 'Rakhi Sawant' remark, Navjot Singh Sidhu said the former was still descending from the apes and the monkeys.

They say man descended from the apes and the monkeys, Looking at your mind @raghav_chadha I believe you are still descending ! You still haven’t answered my question about notifying the Farm Laws by your Government.

Since November 26, farmers have been protesting at the borders of Delhi against the three farm laws: Farmers' Produce Trade and Commerce (Promotion and Facilitation) Act, 2020; the Farmers Empowerment and Protection) Agreement on Price Assurance and farm Services Act 2020 and the Essential Commodities (Amendment) Act, 2020. Farmer leaders and the Centre have had several rounds of talks, but the impasse continues.