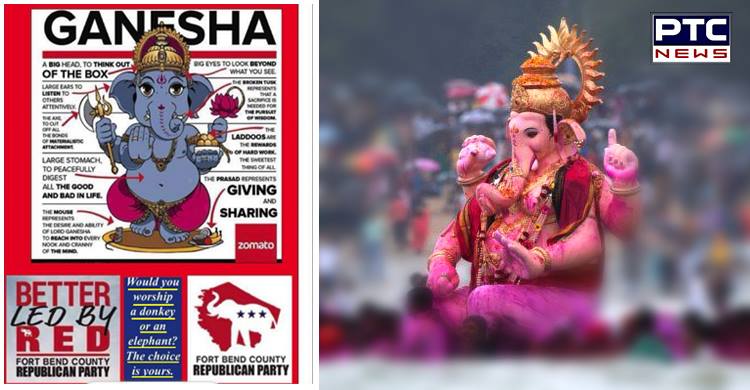 The ruling Republican party in the US has apologized to the Hindus after a newspaper advertisement featuring Lord Ganesha to woo the minority community voters in Texas ended up "offending" them.

The advert, on the occasion of the 'Ganesh Chaturthi' festival, included the imagery of Lord Ganesha with the text, "Would you worship a donkey or an elephant? The choice is yours".

The elephant is the party symbol of the Republicans while Democrats have a donkey as their party's symbol.

The party's county unit, Fort Bend County Republican Party which published the ad, apologised and clarified that it "was not meant to disparage Hindu customs or traditions in any way".

The ad, with arrows pointing to the body parts of Lord Ganesha, listed out qualities such as – 'A BIG HEAD, TO THINK OUT OF THE BOX', 'BIG EYES TO LOOK BEYOND WHAT YOU SEE', 'LARGE EARS TO LISTEN TO OTHERS ATTENTIVELY', 'LARGE STOMACH, TO PEACEFULLY DIGEST ALL THE GOOD AND BAD IN LIFE' among others.

An advocacy group, the Hindu-American Foundation (HAF) of Houston, called on the Fort Bend County Republican Party to apologise for the advert about the celebration of the 'Ganesh Chaturthi' festival.

"While we appreciate the Fort Bend County GOP's attempt to reach out to Hindus on an important Hindu festival, its ad - equating Hindus' veneration of the Lord Ganesha with choosing a political party based on its animal symbol - is problematic and offensive," said Rishi Bhutada, HAF Board Member and Fort Bend County resident.

Using religious imagery in order to explicitly appeal for political support should best be avoided by any political party, he said.

"The implication regarding the worship of animals as gods was also disheartening to the HAF leaders, as that is a common misconception taught in US schools, which frequently ends up becoming a taunt used to bully Hindu students," the HAF said.

Bhutada also called upon the Fort Bend County Republican Party to apologise for the offensive and inaccurate reference, not to run the advert again and for elected officials in the County to send the same message to the Party as well.

Sri Preston Kulkarni, the Democratic candidate for the US Congress from District 22 in Texas, seized on the Republican advert, calling it offensive in a tweet on Tuesday.

"Asking Hindu-Americans if they would rather vote for a donkey or an elephant by comparing Ganesha, a religious figure, to a political party is highly inappropriate. The Fort Bend County Republican party must retract this ad," he said.

Meanwhile, the Fort Bend Republican party responded and said: "The ad was not meant to disparage Hindu customs or traditions in any way. We offer our sincerest apologies to anyone that was offended by the ad. Obviously, that was not the intent".

In a letter, chairman Jacey Jetton, the first Korean-American to lead the Fort Bend County Republican Party said: "The ad was meant to be part of the celebration to acknowledge the 'Ganesh Chaturthi' festival of September 13".

"This ad was created with input from those of Hindu faith so that we could properly pay respect to the sacred festival. This highlights the difficulty in outreach that can be positive for one group but not for another in the same community.

"We offer our sincerest apologies to anyone that was offended by the ad. Obviously, that was not the intent. The ad was not meant to disparage Hindu customs or traditions in any way," Jetton said.