From how skimpy your dress is to the shade of lipstick on your lips, the length of your top to the time you are out at in the night, everything about you is on the radar of all those who think women cause rape and abduction.

Chandigarh, the beautiful city disappoints us with a similar incident. In the stalking case, the son of a BJP leader stalked and attempted to abduct Varnika Kundu, the daughter of an IAS. The police only filed a report for stalking and let out the boys on bail. Not just that, BJP President raised fingers at the girl for staying out at the dark hour.

Haryana BJP Deputy President Ramveer Bhatti questioned why the woman was roaming ‘late at night’. “Parents must take care of their children… they shouldn’t allow them to roam at night. Children should come home on time, why stay out at night?” he said.

Women don’t seem to be pleased with the statement made by the BJP leader, and so they have sought after the most powerful to go viral and that is – Twitter.

With the viral hashtag #AintNoCinderella, women across the country are protesting by posting images of them self out in the dark, reclaiming their right to stay out when and where ever they want!

If you too support Varnika Kundu, or at least seek your own right to safety, hashtag your picture too! 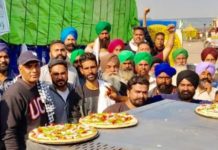