Australia vs Bangladesh, CWC19: Shakib Al Hasan all set to hunt against Oz 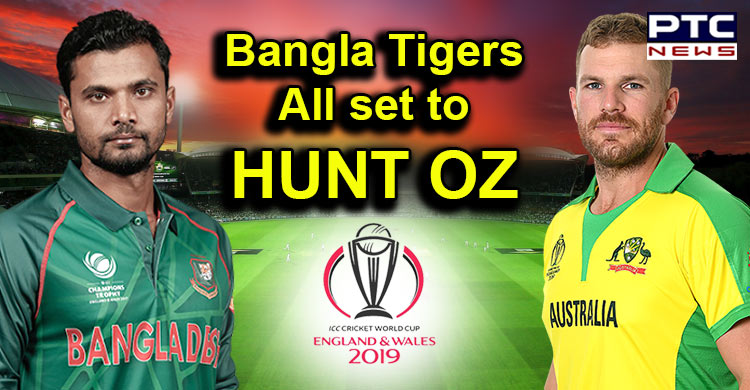 Australia vs Bangladesh: Australia are all set to face Bangla Tigers in their next hunt, after marking the victory over Lanka, in ICC Cricket World Cup 2019. Australia has been in tremendous form throughout the tournament. Australia has won four matches out of five, just lost one match against India. On the other hand, Bangladesh has played five matches so far, in which they lost two against England and New Zealand, but defeated South Africa and West Indies. Bangladesh vs Sri Lanka was abandoned by the rain. Hence, Bangla tigers are still having some hope to enter the semi-finals of ICC Cricket World Cup 2019.

Australia vs Bangladesh is not going to one-sided match as both the teams are performing at their peak. For Bangladesh, Shakib Al-Hasan has been in devastating form as recently he scored a ton 124 runs against West Indies. Shakib Al Hasan has been the leading run-scorer for the team. Shakib has scored two centuries and two half-centuries in ICC Cricket World Cup 2019 so far. Shaik Al Hasan scored 75 runs against South Africa, 64 against New Zealand, 121 runs against England and 124 against West Indies. Likewise, Australian skipper Aaron Finch scored a ferocious ton against Sri Lanka in their last encounter.

For Bangladesh, Mitchell Starc will be a tough question paper as the bowler is in devastating form in ICC Cricket World Cup 2019 so far. Starc in last battle against Sri Lanka took four wickets by giving just 55 runs off his 10 overs. Likewise, David Warner will also be a threat as he has also scored a ton against Pakistan.

Steven Smith is the man to watch out for, as he has no mood to go back to pavilion soon. All in all the match is a high voltage drama, where there will be pace, sixes, boundaries, yorkers and most importantly the swing.