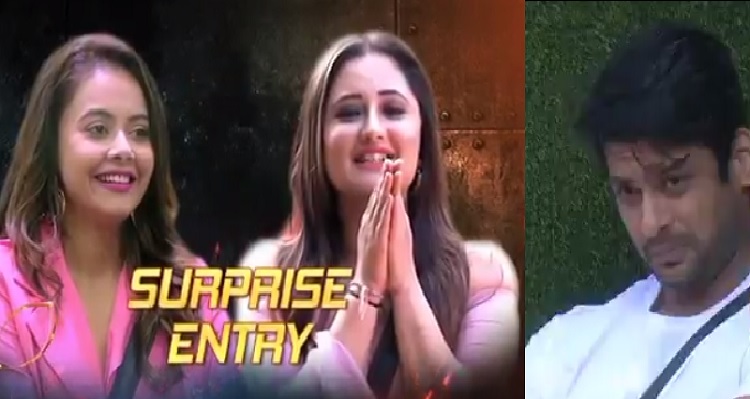 Bigg Boss 13: Four days after the elimination, Rashmi Desai and Devoleena Bhattacharjee return to the Bigg Boss house as a surprise entry. There were speculations that the duo have been put into the secret room. Rashmi, Devoleena and Shehfali Bagga were eliminated last week, which was a major shocker, and also the fans were unhappy. The fans took it to twitter and urged Bigg Boss to bring Rashmi and Devoleena back.

In a promo, Devoleena and Rashmi enter the house wearing pink dress. Their entry has put a smile on some of the faces, while some of them are not happy. Among the unhappy, Siddharth Shukla looks worried. In fact, Rashmi Desai asked housemates, "He (Siddharth Shukla) is not happy?" No, the housemates replied. She said, "Doesn't matter."

Meanwhile, Arhaan Khan who is said to be Rashmi's friend was very happy and hugged her for a while. Shehnaz Gill was also happy, as she was heard as saying, "Ab family puri hui hai (Now, the family is completed)." Among the housemates, Hindustani Bhau (Vikas) was shocked and while discussing it with Shefali Zariala, he said: "Bhai Bigg Boss, Baap ho re tum."

In another promo, Shehnaz and Hindustani Bhau, were seen fighting each other. The video is captioned as saying, "the two entertainers are up against each other." Now, the Bigg Boss has started another chapter.