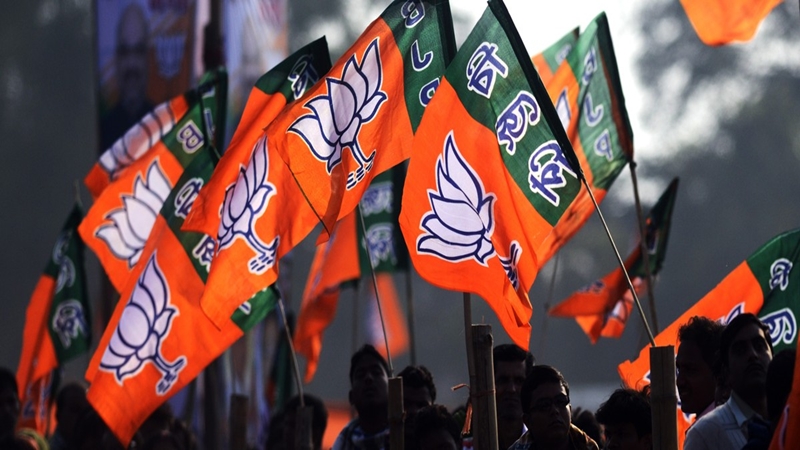 New Delhi: The BJP today promised to provide meals for Rs 10, besides pledging not to levy any new municipal tax, as it released its manifesto with an eye to win the upcoming MCD polls for the third consecutive time.

The 'Sankalp Patra' (manifesto), described by BJP leaders as the "charter of commitment", also promised to work towards a Delhi "as envisioned by Prime Minister Narendra Modi".

On the lines of the Yogi Adityanath-led Uttar Pradesh government's proposal to provide food at subsidised rates and the Aam Aadmi Party's (AAP) decision to start its own canteens, the manifesto promised to provide meals for Rs 10 under a new scheme.

"A scheme, the Deendayal Antyodaya Rasoi Yojana, will be launched and the civic bodies will provide meals priced at Rs 10," said Delhi BJP chief Manoj Tiwari, who released the manifesto along with senior party leaders, including Union ministers Harsh Vardhan and Vijay Goel.

The elections for the 272 wards of the three municipal corporations in New Delhi are due on April 23. The BJP, which ruled the unified Municipal Corporation of Delhi (MCD), had also won the three corporations after the trifurcation of MCD in 2012.

The Arvind Kejriwal-led Delhi government had announced the launch of its own canteens which would provide meals for Rs 5 to Rs 10. One such canteen is functioning at the LNJP hospital.

According to media reports, the Adityanath government in Uttar Pradesh is mulling opening 'Annapurna Bhojanalayas' which will serve breakfast and lunch for Rs 3 and Rs 5 respectively.

BJP's MCD poll manifesto contains 41 points, including promises, proposals as well as plans after the victory in the election. It will be reviewed every two years.

"We are committed to work towards a Delhi of Prime Minister Narendra Modi's dreams after winning the corporation election," Tiwari said.

"No new tax will be levied or rates hiked if the party is voted to power," the manifesto said.

This comes in the backdrop of the Aam Aadmi Party's allegation that power and water tariffs will go up if the BJP wins the MCD polls.

"Kejriwal is trying to scare the people. We will neither levy any new tax or hike rates, nor allow anyone else to do it. We will strongly resist any such move," said Tiwari.

Tiwari also said the BJP will work for direct transfer of funds from the Centre to the municipal corporations.

Over the last two years, the BJP-ruled civic bodies and the AAP government had been engaged in a war of words over transfer of funds amid strikes by sanitation workers in east Delhi.

"The Delhi government has an annual budget of Rs 48,000 crore in which, the civic bodies have a share of Rs 9,000 crore. But, they received only Rs 2,800 crore. We will force the government to release the dues," said Tiwari.

Taking a dig at Delhi Chief Minister Arvind Kejriwal for his allegations of corruption and non-performance in the civic bodies, he said, "He (Kejriwal) should sit in the parks of MCD and his cough, for which he goes to Bengaluru, will be cured."

The manifesto promised a "transparent and corruption- free" rule. It also promised to regularise the temporary sanitation workers, digitalisation of citizen services, putting pressure on the Delhi government for regularisation of unauthorised colonies.

It also promised a Rs-10 lakh insurance cover for the students in the MCD schools, health cards for citizens, open gymnasiums, scrapping factory licences, promoting enterprises run by women under the Centre's Startup India scheme, special arrangements to address the problems faced by the people of north-east in the city.

Autorickshaw and taxi stands with restrooms for drivers and issuance of licences to hawkers and street vendors under the Street Vendors (Protection of Livelihood and Regulation of Street Vending) Act, 2014 have also been promised.

The 27-page 'Sankalp Patra' devoted two pages to the party's allegations of corruption against the Congress and the AAP.