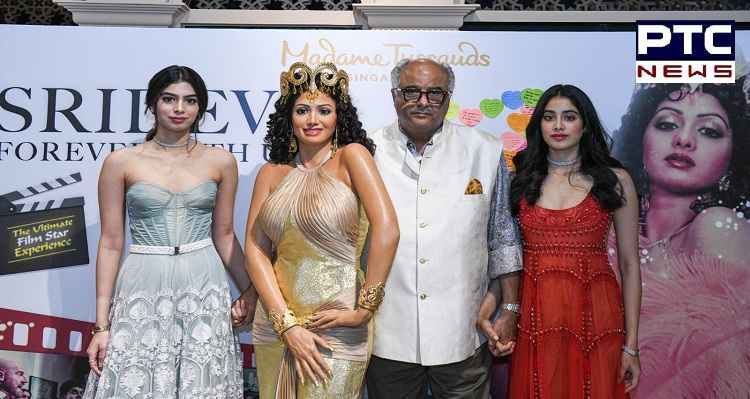 The veteran actor Sridevi has been recently immortalized as a wax statue at Madame Tussauds in Singapore on Wednesday. Bollywood Producer Boney Kapoor along with daughters Janhvi Kapoor and Khushi unveiled the wax statue of Sridevi. The whole family was very emotional while they were unveiling the statue of the late legendary actress. The wax statue has been made in her character of Hawa Hawai from the popular Bollywood film "Mr. India".

The statue has been donned with a gold-colored costume, just like the one she was wearing the iconic song Hawa Hawai. Meanwhile, Boney Kapoor shared a video on his twitter. He said in a tweet, "Sridevi lives forever in not just our hearts but also in the hearts of millions of her fans. Eagerly waiting to watch the unveiling of her figure at Madam Tussauds, Singapore on September 4, 2019". Madame Tussauds had taken this initiative to add Sridevi wax statue as a tribute to the late legendary actress on her 56th Birth Anniversary on August 13.

Will have a wax statue at London’s Madame Tussauds museum, says Baba Ramdev

Sridevi passed away on February 24 in Dubai, while she was there to attend the family wedding. She was born in Sivakasi. She started her career in the film industry at a very young age, as a child artist at the age of just 4 years in the Tamil movie Kandan Karunai in 1967. Likewise, she had done several movies in the Indian Film Industry. She had acted in almost 300 films in her career of over 5 decades.