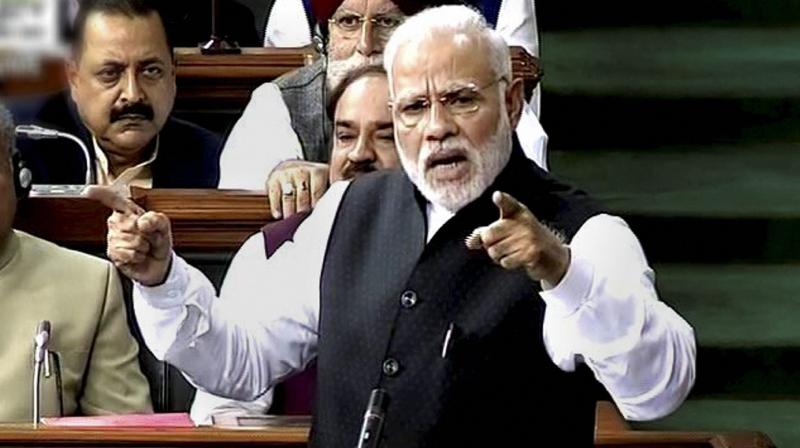 New Delhi: Prime Minister Narendra Modi on Tuesday described the Budget Session as a "winner" for the treasury benches as the government was able to secure the passage of many key bills in Parliament.

Addressing the BJP Parliamentary Party meeting a day before the session ends, he also pitched for pushing the reforms and development agenda, asserting that there is a "positive" public mood in the favour of the ruling dispensation as it completes its third anniversary next month.

"This is a golden opportunity for us to lift the lives of the poor, the deprived.This is the time for doing more development and reforms," he said.

The BJP MPs were also informed about a one-long programme to celebrate the government's third anniversary from May 24. Briefing reporters following the meeting, Parliamentary Affairs Minister Ananth Kumar said that Modi called the
session very constructive with the Lok Sabha passing 21 bills and the Rajya Sabha 14. These include the GST bills and also the politically important OBC bill.

Referring to the massive win for BJP in the Uttar Pradesh Assembly polls, the prime minister said the hope his government had generated among the masses in 2014 has turned into confidence.

Heaping praise on Modi, Naidu referred to last night's meeting of 33 NDA constituents in which important allies like Parkash Singh Badal of Akali Dal and N Chandrababu Naidu of TDP spoke about his "transformative" leadership.

"Modi has emerged as the poor's messiah," he claimed. On the occasion, Modi noted that it was the birth anniversary of Hanuman, a devotee of Lord Rama, and that he was a "living" example of a "dedicated social worker" which should inspire one and all.