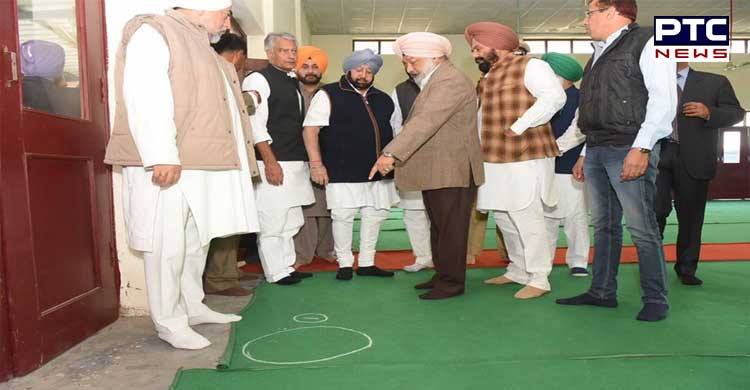 Punjab Chief Minister Captain Amarinder Singh on Monday said the grenade attack at the Nirankari Bhawan seemed to carry Pakistan’s signature, with initial investigations indicating that the grenade used was similar to the ones being manufactured by the Pakistani Army Ordinance factory.

The Chief Minister, who flew in from Chandigarh along with his cabinet colleague and Amritsar MLA Navjot Singh Sidhu and PPCC president Sunil Jakhar, to take stock of the situation, said the police had recovered similar HG- 84 grenade from a terror module busted by the Punjab Police last month , indicating a high probability of the involvement of inimical forces from across the border.

Prima facie, this appears to be an act of terror by separatist forces, organized with the involvement of ISI-backed Khalistani or Kashmiri terrorist groups, said the Chief Minister, adding that his government had taken serious note of the incident and was aggressively pursuing all angles of investigation.

The culprits would soon be arrested, he promised, while talking to media persons after visiting the site of the attack. The state government has announced Rs 50 lakhs as reward for any information leading to the arrest of the assailants.

Captain Amarinder said the NIA was also helping in the investigations. He said certain leads had been unearthed by the police and same were being investigated.

Responding to a query, Captain Amarinder said the attack could not be equated with the Nirankari conflict in 1978, as that was a religious matter and the Adliwal incident was purely a case of terrorism. Violence between the Sant Nirankari Mission and traditional Sikhs on 13th April 1978 at Amritsar had left 13 dead, and sparked the subsequent wave of terrorism in the state. Yesterday’s incident had no religious overtones, as per initial investigations, said the Chief Minister.

Asked to react to HS Phoolka’s outrageous statement accusing the Army Chief of orchestrating the Nirankari Bhawan grenade attack to prove himself right on the revival of terrorism in the state, the Chief Minister said the AAP leader was apparently `unstable.’

Only someone suffering from mental instability could come out with such a despicable and nonsensical statement, said the Chief Minister, after undertaking an on-the-spot assessment of the ground situation here in the wake of the grenade attack at the Nirankari Bhawan.

In response to a question, the Chief Minister said the state was already on high alert, with strict checking going on around landmark buildings and other vital public installations and infrastructure. Police nakas had been set up in all districts and patrol parties were moving around in search of suspicious objects/activities, he said, directing the district and police administration to explore the possibility of installing CCTV cameras at all strategic points.

Meanwhile, the Chief Minister, who visited the IVY Hospital to meet the injured, has announced jobs for the kin of those killed in the attack and Rs 50000 each to the injured, in addition to their free treatment.

Accompanied by top police and administrative officials, the Chief Minister went around the site of the attack and examined the spot from where the grenade was lobbed by two men. The men, armed with a pistol and their faces covered, had forced their way into the Bhawan after taking the civil guards hostage at gunpoint. They had lobbed the grenade into the prayer room, killing three and injuring 15 people.

Earlier, on his arrival, the Chief Minister was briefed by Home Secretary NS Kalsi, DGP Suresh Arora, and DC Amritsar Kamaldeep Sangha, who updated him on the progress of the investigations so far.