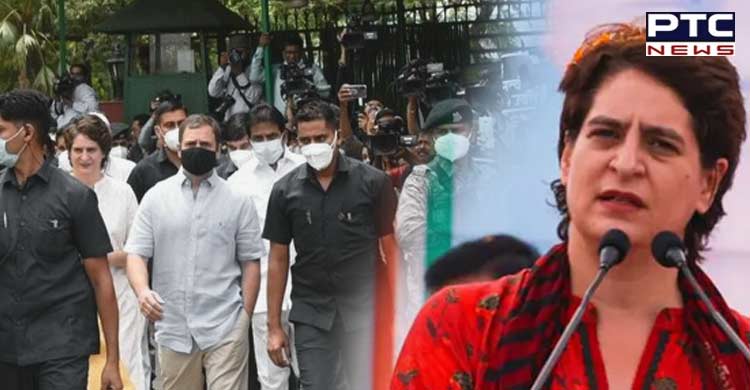 New Delhi, June 13: Congress leader Rahul Gandhi accompanied by his sister and party leader Priyanka Gandhi Vadra arrived at Congress headquarters on Monday, ahead of his appearance before the Enforcement Directorate in the National Herald case. After this, he joined workers in marching to the ED office from the headquarters.

Talking to the media, Randeep Surjewala said the BJP government has imposed an "undeclared emergency" in the entire central Delhi area.

"We will hold a peaceful protest march to the ED office under the leadership of Rahul Gandhi. We are the protectors of the Constitution, we will not bow down or be scared. By deploying a large police force, it has been proven that the Modi government is shaken by Congress."

Furthermore, Congress MP Karti Chidambaram said that they are here in Delhi from various parts of India to show solidarity with our party leadership and show the nation the blatant misuse of ED.

On Monday, a huge police deployment was seen outside the Enforcement Directorate office with some Congress workers getting detained outside party headquarters.