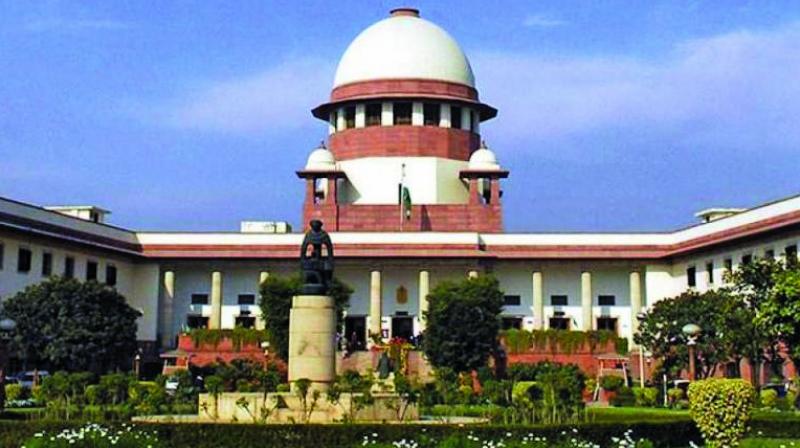 The Supreme Court monday asked as to how a convicted person be an office-bearer of a political party and select candidates for elections, as it was against the spirit of one of its judgement to ensure "purity" of polls.

The apex court was hearing a PIL seeking to restrain convicted persons from forming and holding posts in political parties for the period they are disqualified under the election law.

"How can a convicted person be an office-bearer of a political party and select candidates to contest elections? This goes against our judgements that corruption in politics is to be ostracised from the purity of elections," a bench comprising Chief Justice Dipak Misra, and Justices A M Khanwilkar and D Y Chandrachud said.

The bench said that the "pure question of law" was that following the conviction a politician is barred from electoral politics, and being an office-bearer of a party, he can contest polls through agents.

"So, is it that what you cannot do individually, you can do collectively through some of your agents?" the bench asked.

It said that there was no problem if convicted people open a school and do some philanthropic activities, but the issue was can such persons contest polls through others by forming a political party.

The bench said it was a "huge blow to the purity of the electoral process".

Additional Solicitor General Pinky Anand, appearing for the Centre, said she would be filing the response to the petition and sought two weeks time, which was allowed.

The bench was hearing a PIL filed by lawyer and BJP leader Ashwini K Upadhyay seeking to restrain convicted people from forming political parties and becoming office- bearers during the period they are disqualified.

The top court had on December 1 last year sought responses from the Centre and the Election Commission on the PIL and agreed to examine the constitutional validity of section 29A of the Representation of the People Act (RPA), 1951 (RPA), which deals with the power of the poll panel to register a political party.

Senior lawyer Siddharth Luthra, appearing for Updhyay, had said that under the statutory schemes, the poll panel was empowered to register political parties, but it lacked the authority under the RPA to de-register them.

The plea said convicted politicians, who are barred from contesting elections, can still run political parties and hold posts, besides deciding as to who will become a lawmaker.

It has sought a direction to declare section 29A of the RPA as "arbitrary, irrational and ultra-vires" to the Constitution and to authorise the poll panel to register and de-register political parties.

The petitioner has also sought a direction to the Election Commission to frame guidelines to decriminalise the electoral system and ensure inner party democracy, as proposed by the National Commission to Review the Working of the Constitution (NCRWC).

The petition said currently, even a person who has been convicted of heinous crimes like murder, rape, smuggling, money laundering, loot, sedition, or dacoity, can form a political party and become its president or office bearer.

It said the proliferation of political parties has become a major concern as Section 29A of the RP Act allows a small group of people to form a political party by making a very simple declaration.

The plea also claimed that in 2004, the poll panel had proposed amendment to Section 29A, authorising it to issue apt orders regulating the registration or de-registration of political parties. PTI