Delhi: In a shocking incident, a teenager killed a CRPF man and two others are injured after WagonR, in which three of them were traveling rammed into the Speeding Mercedes which was driven by a teenager son of Noida-businessman. The teenager was speeding towards Chirag Dilli and even jumped the red lights. The incident took place at Archana crossing near Kailash on the BRT corridor. The speeding Mercedes after hitting WagonR hits the traffic signal pole near Archana Complex and hence he was held by the locals and handed over to the policemen in a PCR Van. 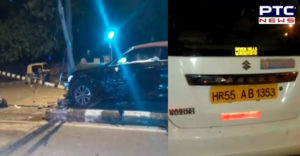 The teen has been identified as Sanidhya Garg (19), while three men have been ascertained as Vinod Kumar, Babulal Yadav, and Narender, who were rushed to the AIIMS trauma center, where Narender succumbed to the injuries. The eyewitnesses claimed that the impact was so massive that the WagonR turned over a few times. According to the sources, the three men were deployed for Prime Minister Narendra Modi’s security duty.

Sanidhya Garg is pursuing graduation for a college in London and had come to India on a vacation. He went to meet his friends in South Delhi. He informed the police officials, that the car belongs to his father, who is an iron businessman in Noida. Meanwhile, the police have booked him under Section 304A (causing death due to negligence) of the Indian Penal Code. Likewise, the Mercedes has been sent for the forensic lab to find out whether it had some mechanical issue or not.