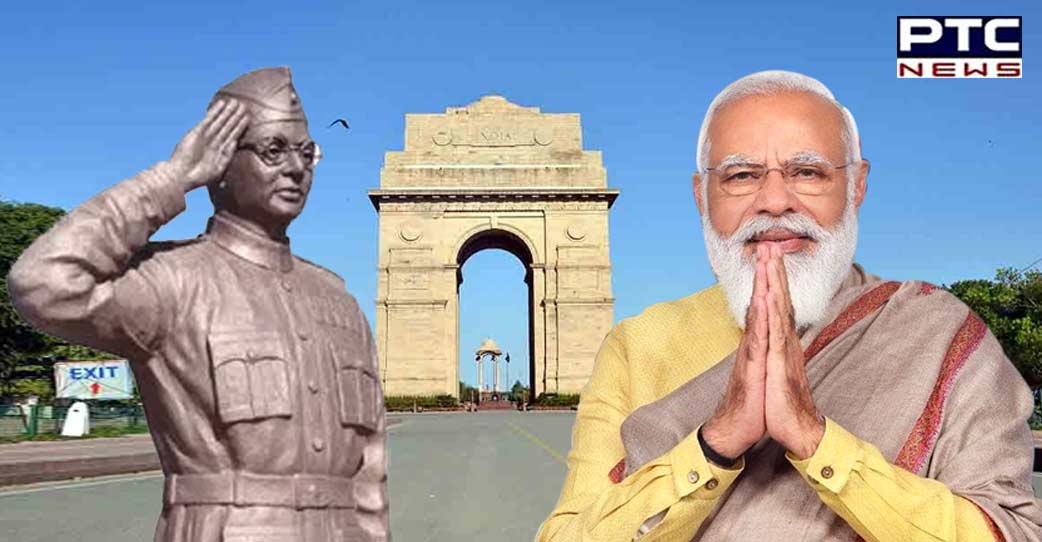 The jet black granite statue, with a height of 28 ft. has been placed under the Canopy near India Gate. The statue of Netaji Subhas Chandra Bose, which was unveiled by the Prime Minister, is installed in the same place where a hologram statue of Netaji was unveiled earlier this year on Parakram Diwas (January 23) by him to mark the 125th birth anniversary of Netaji.

According to an official statement, the grand statue of Netaji being unveiled has been carved from a monolithic block of granite weighing 280 MT. After 26,000 man-hours of intense artistic endeavour, the granite monolith was chiselled to produce a statue weighing 65 MT. The statue is completely hand sculpted using traditional techniques and modern tools. The team of sculptors for executing the statue was led by Arun Yogiraj.

"The 28 feet tall towering statue of Netaji is one of the tallest, realistic, monolithic, handmade sculptures in India. The PM had on 21st January 2022 assured that a grand statue of Netaji made of granite will be installed at India Gate as a symbol of the nation's indebtedness to him," said the statement earlier.

A 100 feet long truck with 140 wheels was specially designed for this monolithic granite stone to travel the 1,665 km from Khammam in Telangana to New Delhi.

"To demonstrate the spirit of Ek Bharat - Shrestra Bharat and Unity in Diversity a cultural festival by 500 dancers drawn from all parts of the country, would be showcased on the Kartvya Path. A glimpse of the same would be shown to the Prime Minster on the step Amphitheatre near India Gate by around 30 artists who will perform tribal folk art forms such as Sambalpuri, Panthi, Kalbelia, Kargam and dummy horse with live music by Nashik Dhol Pathik Tasha and Drums. Mangalgaan penned by Padma Bhushan Pt. Shrikrishna Ratanjankarji on the auspicious occasion of the 1st Independence Day of India in 1947 is being presented by Pt. SuhasVashi along with a team of singers and musicians. Ashish Keskar will be the music director for the presentation," it said.

A special 10-minute Drone Show on Netaji's life would be projected at India Gate at 08.00 pm on September 9, 10, and 11. Both the cultural festival and the drone show would be open to public with free entry.