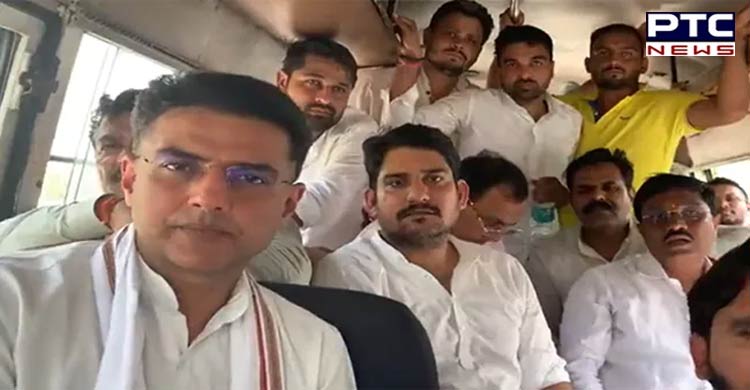 New Delhi, June 15: Senior Congress leader Sachin Pilot was detained by the Police on Wednesday as he was on his way to the party headquarters on Akbar Road, New Delhi.

The development comes as police detained hundreds of Congress workers for protesting over the ED's questioning of Rahul Gandhi in connection with the National Herald case.

Notably, the former Congress president was asked by the ED to rejoin the investigation for the third consecutive day.

Sachin Pilot, in a video shared on social media, said he was only trying to get inside his party headquarters and added, "I don't know which police station they are taking me to. This is wrong. I condemn this."

"We will go on with our protest for justice," Sachin pilot said from the police van.

According to Congress, police forced their way into the party's headquarters and assaulted the workers. The claims that cops broke into the party office and beat up party workers were refuted by the Delhi Police. A scuffle may have occurred, and several individuals may have hurled barricades at the police near the party headquarters, SP Hooda, special commissioner (law and order) said, but he denied using force against party workers.

"In an act of absolute goondaism perpetuated by the Delhi Police at the instance of the Modi government, the police today forcibly entered the national headquarters of the Congress here and beat up party workers and leaders. This is patently criminal trespass. The goondaism of Delhi Police and Modi government has reached its zenith," Congress leader Randeep Surjewala said.