Dhinakaran rules out revolt against him by some ministers 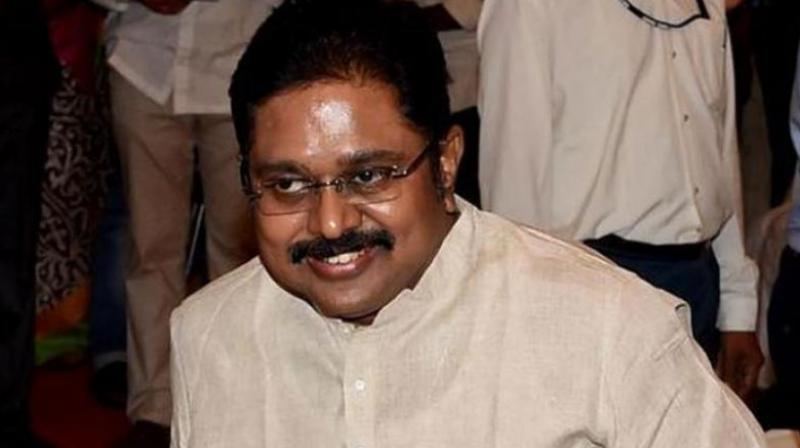 Chennai: AIADMK (Amma) Deputy General Secretary TTV Dhinakaran Friday denied speculations that some state Ministers had revolted against him. "There is no such information, it could be a rumour," he told reporters here.

He was responding to a query on speculations that some of the AIADMK ministers had revolted against him and wanted him to be removed as the party's Deputy General Secretary.

The ruling party had suffered a vertical split after the death of the late Chief Minister and former AIADMK General Secretary J Jayalalithaa in December last, following which her close aide VK Sasikala was appointed as the party chief.

However, in February this year, former Chief Minister Panneerselvam had revolted against Sasikala, alleging he was forced to make way for her to become Chief Minister of the state.

Subsequently, AIADMK suffered a split, with some MPs and MLAs joining the Panneerselvam camp even as Chief Minister K Palaniswami, a Sasikala loyalist, survived a confidence vote in the state Assembly.

Sasikala is since serving a jail term in connection with the Rs 66 crore disproportionate assets case in Bengaluru.

To a question, Dhinakaran said he did not see any central government interference on the issue of freezing of AIADMK's two leaves symbol by the Election Commission.

"As far as Iam aware, there is no central government interference. Because the issue (of Two Leaves symbol) was raised by those against us (the Panneerselvam faction) Election Commission is looking into it," he told reporters.

On his faction's Tirupur (South) MLA S Gunasekaran staging a fast yesterday alleging that some officials were not cooperating for implementation of welfare schemes, he said "it shows the kind of freedom in our party and the government."

Dhinakaran also denied reports that some Ministers had sought for the sacking of their colleague C Vijayabaskar, who is under the Income Tax scanner with searches being conducted at his premises.

He said he held discussions with senior ministers at his residence today and the subjects included the Panneerselvam faction challenging Sasikala's appointment as General Secretary in the EC.