'Disarrayed And Opportunist' People Like Sidhu Were Good For Nothing: CM Parkash Singh Badal 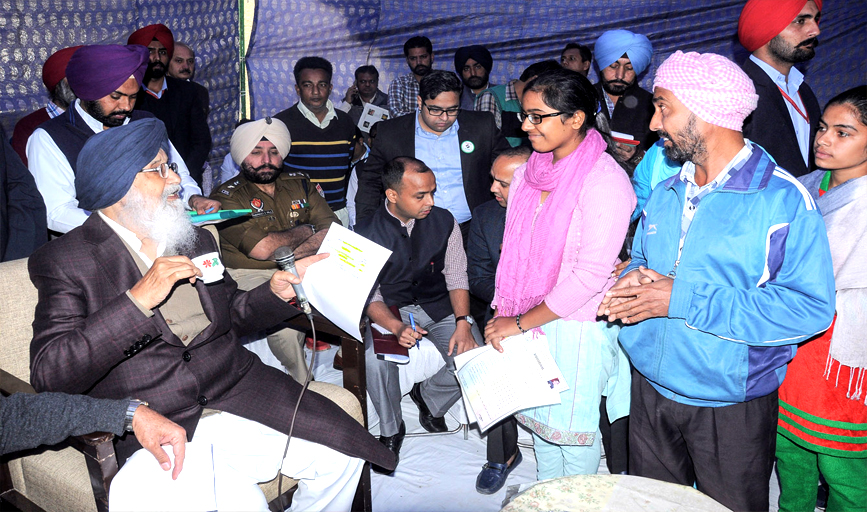 Interacting with the media persons on the sidelines of Sangat Darshan program in Lambi assembly segment here today, the Chief Minister, when asked to comment on probability of former BJP MP joining the Congress, said that Mr. Sidhu was non decisive in joining any party due to his vested interests. However, Mr. Badal said that people who have no stand on any issue was bound to go in political oblivion. He said that people of the state have strong disliking for opportunists and defectors, who backstab their mother party for sake of personal interests.

Replying to another query, the Chief Minister said that only those people were revolting against Akali Dal, who have been denied tickets by the party. He said that the ticket distribution has been done purely on merit and such people would not get any support amongst the masses. Mr. Badal said that people support on the party and such rebels do not have any future.

On another query, the Chief Minister said that anyone was free to contest election against anybody in the state during forthcoming assembly polls. However, he said that one thing was crystal clear that security deposits of Lok Sabha MP and Aam Aadmi Party leader Mr. Bhagwant Mann would be forfeited, if he contests against Deputy Chief Minister Mr. Sukhbir Singh Badal from Jalalabaad assembly segment. Mr Badal said that the state government has ensured holistic development in the state.

Replying to another query, the Chief Minister said that the demonetization move of NDA Government led by Prime Minister Mr. Narendra Modi would prove very beneficial for the countrymen as this step has been taken in larger interest of the country. He said that after initial hiccups this scheme, which was the brain child of Prime Minister Mr. Narendra Modi, would act as a catalyst to wipe out several social maladies from country.

The Chief Minister said that coming November 25 was a red letter day for the state as Prime Minister would lay the foundation stone of All India Institute of Medical Sciences at Bathinda, which would act as a catalyst for imparting quality healthcare facilities to the people. Mr. Badal said that for the first time since independence any Centre government has given such a big ticket project to the state. He said that this project to come up at a cost of Rs 1000 crore would transform the healthcare sector in the state.

Describing the resignation by Captain Amarinder Singh as a mere political stunt, the Chief Minister dared the state Congress Chief to explain why the other Congress MPs had not resigned after verdict of Apex court on Satluj Yamuna Link Canal issue. He said that the resignation drama was aimed at deriving political benefit from this sensitive issue rather than safeguarding the interests of the state. Mr. Badal said that Congress leadership was totally insincere on this emotive issue concerning every Punjabi.

Earlier addressing the public gatherings, the Chief Minister categorically said that the SAD-BJP government has started a flagship program of Sangat Darshan to redress the grievances of the people in a time bound manner. Mr. Badal said it was a unique program that was being carried only in the state with the sole motive of ensuring the overall development of the state and welfare of its people. Mr. Badal said that it was on record that besides giving a major fillip to the overall development of the state, the Sangat Darshan programs has also been instrumental in mitigating the woes of common people. He further said that the concept of Sangat Darshan was an integral part of state’s governance as it virtually brought the government at the doorsteps of people thereby bridging the communication gap between the masses and the administration, which normally hindered the process of progress.