India has conveyed to Washington that any discussion over Kashmir will be held only with Pakistan and only ‘bilaterally’, following the US President Donald Trump’s remark in which he said, that he had spoken to India over intervention in Kashmir.

Have conveyed to American counterpart @SecPompeo this morning in clear terms that any discussion on Kashmir, if at all warranted, will only be with Pakistan and only bilaterally.

After meeting US Secretary of State Mike Pompeo on the sidelines of ASEAN meet in Bangkok, External Affairs Minister S Jaishankar said, “Have conveyed to American counterpart Mike Pompeo this morning in clear terms that any discussion on Kashmir, if at all warranted, will only be with Pakistan and only bilaterally.” 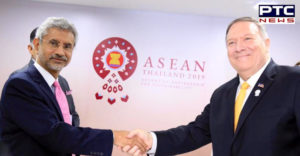 Earlier, US President Donald Trump gave a response to the question asked over the intervention in Kashmir. He said that it is all up to Prime Minister Narendra Modi. He also stated that he met Pakistan Prime Minister Imran Khan and he got along great. He further said they (PM Modi and PM Imran Khan) are fantastic people.

Also, he said he thinks that they can get along very well. Furthermore, he said that he had spoken to India on the Kashmir issue. “If they wanted somebody to intervene(on Kashmir issue) or to help them… and I spoke with Pakistan about that, and I spoke, frankly, to India about it. But that’s been going on, that battle, for a long time,” he was quoted as saying by ANI. “If I can.. if they wanted me to, I would certainly intervene(on Kashmir issue),” said Trump.