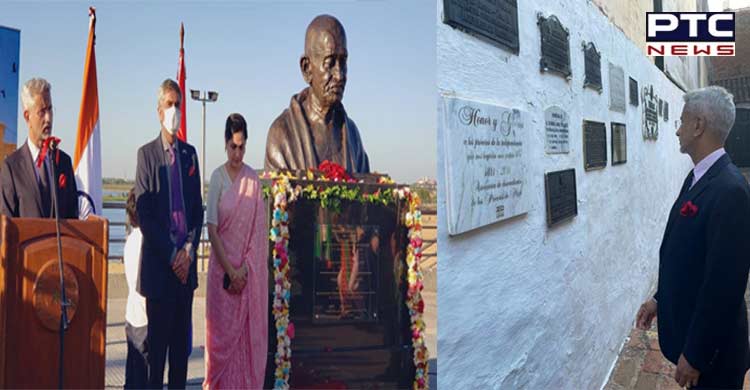 Asuncion (Paraguay), August 22: External Affairs Minister S Jaishankar on Sunday unveiled a bust of Mahatma Gandhi in Paraguay and lauded the Asuncion Municipality's decision to locate it at the prominent waterfront of the city.

Notably, EAM Jaishankar is on his first ever official visit to South America.

"Appreciate Asuncion Municipality's decision to locate it at the prominent waterfront of the city. This is a statement of solidarity that was so strongly expressed during the Covid pandemic," Jaishankar said on Twitter.

Hailing the relationship between the two countries, the EAM stated on Twitter, "Visited the historic Casa de la Independencia, from where Paraguay's Independence movement started more than two centuries ago. A fitting testament to our common struggle and our growing relationship."

Jaishankar is on an official visit to Brazil, Paraguay, and Argentina from August 22-27. In addition to bilateral meetings with his counterparts, the External Affairs Minister will meet with the senior leaders of all three nations during his visit.

In Paraguay, EAM will also inaugurate the newly opened Indian Embassy, which will begin operations in January 2022.

Jaishankar met with Latin American and Caribbean ambassadors in New Delhi on Friday, ahead of his visit to the region.

The Minister thanked the Ambassadors for their perspectives and insights into developing mutual relations and cooperation and expressed optimism about the prospects for increased cooperation between India and the South American and Caribbean countries.