Election in RR Nagar deferred due to irregularities: CEO 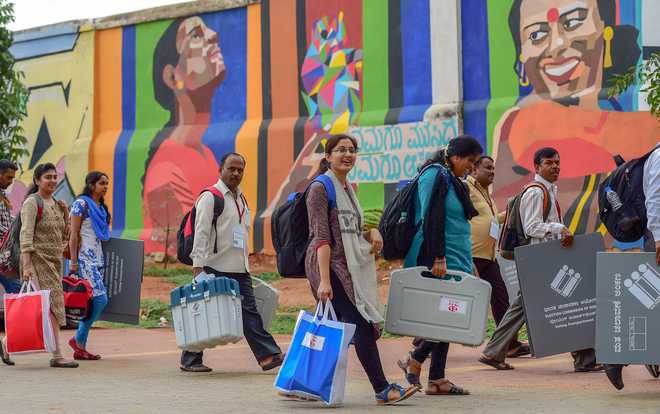 The election in voter ID controversy hit Rajarajeshwari Nagar constituency here was deferred to May 28 due to various irregularities, the state electoral authorities said.

The Election Commission of India today deferred the poll to May 28 and counting of votes will be held on May 31.

The decision was taken based on the discovery of 9,564 Election Photo Identity Cards (EPIC) from an apartment at Jalahalli under Rajarajeshwari Nagar assembly constituency, Chief Electoral Officer Sanjeev Kumar told reporters here.

Besides this, the commission took a serious view of the discovery of a huge cache of water cans, tee-shirts, half pants and pressure cookers meant to bribe the voters, he said.

Conviction of such persons, specifically if under Section 121 of the RPA, can result in the election of the returned candidate being declared void, he said.

Besides, the candidate found guilty of such a corrupt practise can also be disqualified by the President on the recommendation of the commission, said Kumar.

He said the investigation led to the recovery of sarees and water cans from houses. The cans were similar to what the commission found in Jalahalli apartment, where the voter ID cards were found.

"It appears that attempts were made to systematically influence voters," Kumar said.

He said besides water cans, EPIC, pressure cooker, a truckload of 5,018 tee shirts with photos of the candidates and 23,393 half-pants were found.

A truck was dispatched from Tirupur to Tumakuru, but was unloaded at Bengaluru.

While Reliance Retails came forward to claim the half pants, nobody came to claim the tee-shirts, Kumar said.

The tee-shirts carried the photo of the same candidate who did the survey and other things were quite visible, he said. PTI