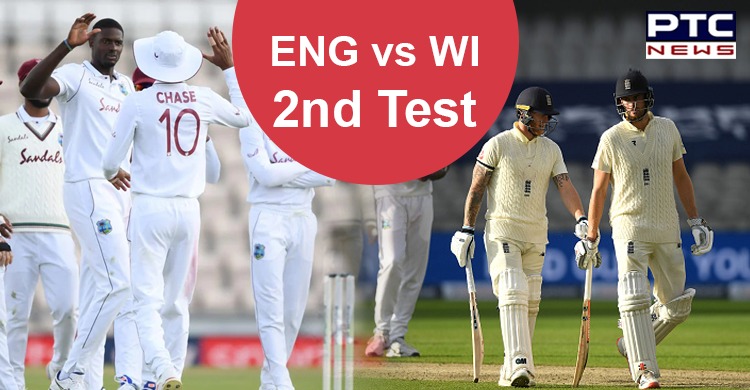 England vs West Indies 2nd Test Manchester: West Indies and England are currently playing the second Test of the ongoing three-match series in Manchester. Rain delayed the start of the Test match before West Indies won the toss and elected to bowl first. West Indies bowlers did a great job with the ball in the early day of the game.

Meanwhile, legendary cricketer Sachin Tendulkar, who has been closely following the Test series praised the West Indies skipper Jason Holder for his brilliant captaincy in Manchester. He was impressed after Holder went with a spinner on a damp pitch that worked in the favour of West Indies as off-spinner Roston Chase bagged two quick wickets.

Likewise, before the Lunch, Holder again brought Chase to bowl the 14th over and the spinner trapped Rory Burns. Burns thought that ball would turn but the ball came straight and hit him on the pads and similarly, England's review was wasted.

Burns was dismissed after scoring 15 runs off 35 balls. Chase struck again after the Lunch as he removed Zak Crawley on a duck.

To this, Sachin Tendulkar took to Twitter and wrote: "In the 1st session I noticed a few balls didn’t even carry to the keeper off fast bowlers indicating a lot of dampness in the pitch. Smart move by Jason Holder to bring on a spinner on such a track where the oddball may grip and the other may go straight."