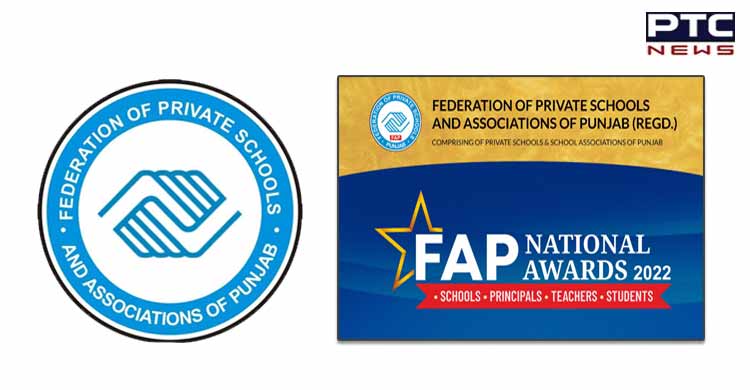 Chandigarh University Chancellor Satnam Singh Sandhu and FAP President Jagjit Singh Dhuri have announced the National School Awards 2022 and also released the portal and poster for nominations for the award.

The 'Pride of Punjab' Award will be given to students who have earned a name for themselves in various fields.

The Federation of Private Schools and Association of Punjab has announced that the National School Award-2022 will be granted to private schools that have made significant contributions to school education at the national level this year.

Private schools around the nation will participate in these awards, with the best school, principal, teacher and student being chosen from numerous schools.

Awards given in the event will be - Life Time Achievement Award (Age 55-58), Best Teacher Award (Age- below 35), Dynamic Teacher Award and Most Inspiring Teacher Award. Meanwhile, awards given to students will be - Pride of Punjab Academic Award, for students scoring more than 99% in 10th and 12th exams (session 2021-22); Mega Olympic Combat Champion, for the first three position holders of State Toppers of Mega Olympic Combat 2022; Sports Award, for having a position at the national level.

22 districts in Punjab have appointed in-charges to help in the nomination process.

The deadline for submitting nominations for the awards is September 30. Candidates can obtain complete information regarding nominations, eligibility, and criteria by visiting the website www.fapawards.in.