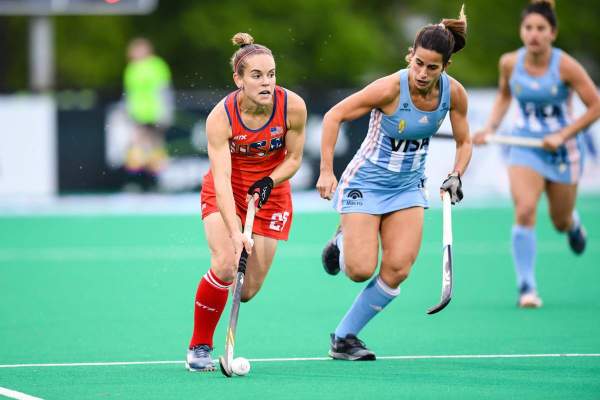 Resurgent attacker Carla Rebecchi produced yet another FIH Pro League Player of the Match performance to help her team  record a comfortable 4-0 away win over Pan American rivals USA at the Spooky Nook Sports Complex in Lancaster, Pennsylvania on Sunday.

Rebecchi - who returned to the national squad in September 2018, 18 months after retiring from the game and six months after starting a family - was once again in exceptional form, scoring once and playing a starring role in the other three strikes as Las Leonas strengthened their hold on second position in the standings. Argentina have claimed  83.33 percent of the points available, behind the Netherlands who have 87.5 percent but significantly ahead of third placed Belgium, who have 72.22 percent. The top four finishers in the FIH Pro League will secure tickets to June’s FIH Pro League Grand Final in Amsterdam and also the FIH Olympic qualifiers, which take place later this year.

Argentina (FIH World Ranking: 4) came into the contest as heavy favourites, already sitting second in the FIH Pro League standings thanks to seven wins and just one loss from the eleven matches they had played. However, the USA (WR:12) have long been a thorn in the side of Las Leonas, something that came to the fore when the two sides clashed in the reverse fixture in Cordoda, where Argentina fought back from 2-0 down to tie the match at 2-2 before claiming a bonus point by winning the shoot-out.

Carlos Retegui’s Argentina made an excellent start to the contest and thought that they had opened the scoring just two minutes into the second quarter through Rebecchi, but her close range finish was ruled by the video umpire after USA successfully appealed regarding an obstruction in the circle.

The South Americans only needed to wait another four minutes before getting the goal that their endeavour deserved, with Agustina Albertarrio finishing off a penalty corner after Rebecchi’s drag-flick caused havoc in the USA defensive circle. Argentina finished the half having racked up 29 circle entries and 12 shots compared to USA’s five circle penetrations and zero shots, although the Americans had a huge chance to go into the break on level terms when Mackenzie Allessie found herself through on goal only for the ever-reliable Silvina D’Elia to chase back and clear the danger.

USA won two penalty corners in the opening minutes of the third quarter, forcing Argentina into some frenetic defending with the first before a direct strike from Kathleen Sharkey forced a good save from Leonas goalkeeper Cristina Cosentino, diving to her right to force the ball to safety.

Just when it seemed that an American comeback might be on the cards, Argentina won a penalty corner and duly doubled their advantage. This time the sensational Rebecchi did get her name on the score-sheet, sending a low drag-flick that somehow squeezed under the right foot of USA goalkeeper Kelsey Bing.

Rebecchi’s influence on the first three quarters had been huge, and it was a theme that continued into the fourth period when she created two goals for Victoria Granatto, who found the net with close range efforts in the 52nd and 53rd minutes to complete a resounding victory for Las Leonas.

“I’m very happy because I think we played a great match”, said Player of the Match Rebecchi. “We really played very well. We’ve been working all this week and have been training very good, so its nice when you can do it on the field as well, so I’m really happy for the team.”

Commenting on Argentina’s form in the FIH Pro League, Rebecchi said: “We didn’t start [the competition] very good but we have kept improving in all of the matches. I think we have to keep improving. It is a new team, and a new coach this year, everything is new but we are doing good and I think we have to keep on doing that so we can get to the Final Four in the best way.”

The FIH Pro League continues next weekend with matches taking place in London, England and Lancaster, USA. On Saturday (18 May), Great Britain’s men and women host Argentina at the Lee Valley Hockey and Tennis Centre before USA face China at Spooky Nook. On Sunday (19 May), Great Britain welcome Belgium’s women and men - the latter being the reigning world champions - to Lee Valley.