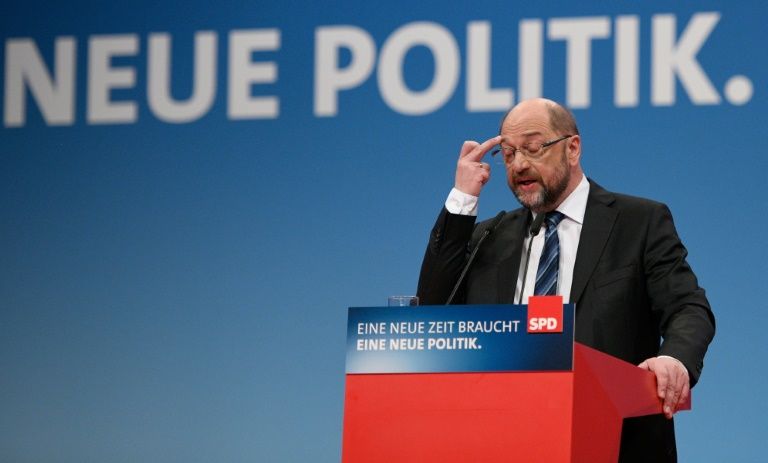 German Chancellor Angela Merkel's hoped-for fourth government suffered a first defeat today before even being sworn in, as prospective foreign minister Martin Schulz stepped back after a series of U-turns.

The perception among Social Democratic Party activists that party chief Schulz had fashioned himself a life raft from the wreckage of an election disaster threatened chances the rank and file would green-light a controversial coalition deal sealed just two days ago. 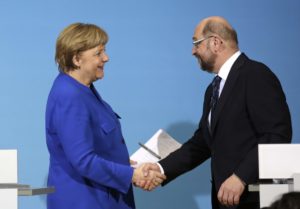 "I hereby renounce joining the federal government and at the same time implore that this should be an end to debates about personalities," Schulz said in a statement.

"My own personal ambitions must be placed behind the interests of the party."

Schulz managed this week to clinch a coalition deal with Merkel's CDU/CSU that gave his centre-left SPD six ministries as well as securing a string of policy concessions.

But reneging on his vow not to serve as a minister in a Merkel-led cabinet prompted a wave of criticism from many party members still smarting over his decision to renew the loveless "grand coalition" despite initially pledging to take the SPD into opposition.

Schulz's choice to step aside to help secure an SPD vote in favour of a stable government "deserves the highest respect and recognition," said Andrea Nahles, his likely successor as party chair.

The move leaves the former European Parliament president empty-handed, after a disastrous year that saw him lead the SPD to its worst-ever score since World War II in September elections, with just 20.5 percent of the vote.

Schulz's retreat is also far from certain to ensure approval in the upcoming postal ballot of some 460,000 Social Democrats, and will do nothing to quiet grumbling among Merkel's troops over the coalition deal.

Kevin Kuehnert, the head of the SPD's youth wing, made clear Friday that he remained determined to block a repeat deal with Merkel.

"I've just begun my 'no grand coalition' tour" of Germany, he tweeted. "The political carnival in Berlin is far away."

A survey by pollsters Civey found this week that around 60 percent of SPD supporters would back the party entering government once again.

But it is unclear whether the party membership will be as open to supporting Merkel.

Nahles said in an interview with ZDF television this week she was confident the "very bold" left-wing character of the contract with Merkel would win members over.

The result of the vote is expected to be announced on March 4.

CDU delegates will get their own chance to vote on the coalition deal at a party congress on February 24.

There is little chance they will block it, but the gathering will show off just how much Merkel's star has faded among a base that has long been loyal to the hilt, as a growing volume of grumbling has made clear since this week.

The chancellor's power pact includes concessions to the left on key policy issues, cedes the powerful finance ministry to the SPD and opens Germany to potentially costly reforms to the European Union and euro single currency that horrify conservatives.

"The CDU is structurally weakened in the government and loses influence" under the deal, influential lawmaker Norbert Roettgen said.

For the German press, such open resistance to Merkel is a sign that the long-serving leader could be on the way out.

"Angela Merkel has succeeded, she will remain chancellor if the SPD members vote for the coalition deal. But her farewell to power has begun, and thereby the debate about her succession," news weekly Der Spiegel commented. (AFP)