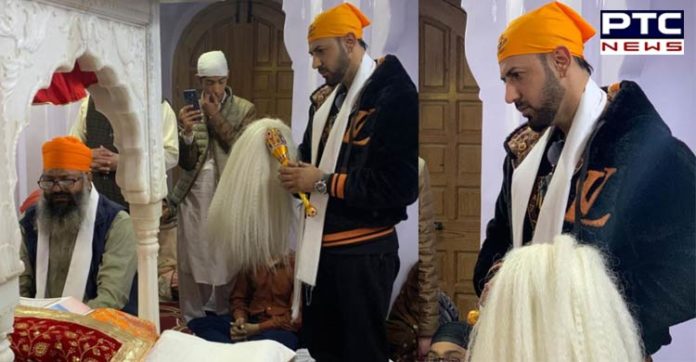 Gippy Grewal in Pakistan: Punjabi actor-singer Gippy Grewal on Monday visited Sri Gurdwara Nankana Sahib in Kartarpur, Pakistan to pay homage. As per report, the 37-year-old Gippy Grewal was welcomed by Pakistani Punjab government along with a delegation. On behalf of the provincial government, Musarrat Jamshed Cheema, Spokesperson of Punjab Government, met Gippy Grewal and welcomed him.

While talking to the media, Gippy said that they had been planning to visit Pakistan. He further said that they had to visit the holy shrine of Gurdwara Nankana Sahib and once again Sri Guru Nanak Dev Ji has bestowed his blessings that the visit to Pakistan became a reality. He also said that “I am very happy to be here.”

Sharing the pictures on social media, Gippy Grewal captioned: “Nankana Sahib ???
#blessed ?? Big thanks to @imrankhan.pti @sayedz.bukhari @rafeyalam @capt_amarindersingh @peter.virdee ??✊✊✊.” Gippy Grewal was welcomed by a lot of people. Special Assistant to PM Imran Khan, Usman Dar wrote: “Welcome to Pakistan. We hope that you have a great time. You will surely find a lot of your Punjabi fans on this side of the border as well.”

PTI worker Munaza Hassan said in a tweet: “Kartarpur corridor is sending a message of peace even in these tough times. Surely, it takes a visionary to break the cycle of hatred. Prime Minister Imran Khan’s initiative will go down in history as an effort to build long standing peace in the region.”

Local journalist Shirad Hassan wrote: “Gippy Grewal is at Gurdwara Janamasthan #NankanaSahib #Pakistan @GippyGrewal, welcome paaa jeee!!!” Syed Z Bukhari said in a tweet: “Welcome to #Pakistan bro!! Hope everything has planned out well… wishing you and your friends a #blessed stay. May all your ibaadat and prayers be answered. Enjoy the corridor of peace! @petervirdee #kartarpur.”