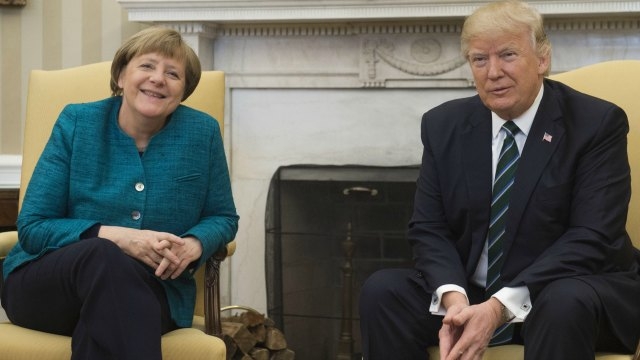 Berlin: German Chancellor Angela Merkel on Saturday said that she has developed a good working relationship with the United States President Donald Trump, despite having a frosty start.

"President Trump and I have developed a good working relationship, which doesn't rule out having different points of view," Merkel told to a local German newspaper.

"If we want to resolve these problems, if we want to help people, we need strong involvement from the United States," she said.

Citing examples of the "problems," she said, "When we talk with each other, for instance, it's about developing a common strategy for the Ukraine conflict or the horrible war in Syria. It's also about the fight against terror or the disastrous humanitarian situation in Yemen - all these conflicts are at the doorstep of Europe."

Recently, even Trump praised the chemistry between the German Chancellor and him.

Earlier in March, in a photo op after their Oval Office, the two leaders sat next to each other in separate chairs. Merkel then appeared to ask the President if he wanted to shake hands, which is customary in photo ops, but Trump simply did not respond. He barely even looked at his German counterpart while quickly answering a few questions from the press.

When asked to shake hands by reporters and photographers, Trump and Merkel remained stationary.

It wasn't clear if the two heard the request, and the two had shaken hands when Merkel arrived at the White House and they shook hands again after a White House news conference.