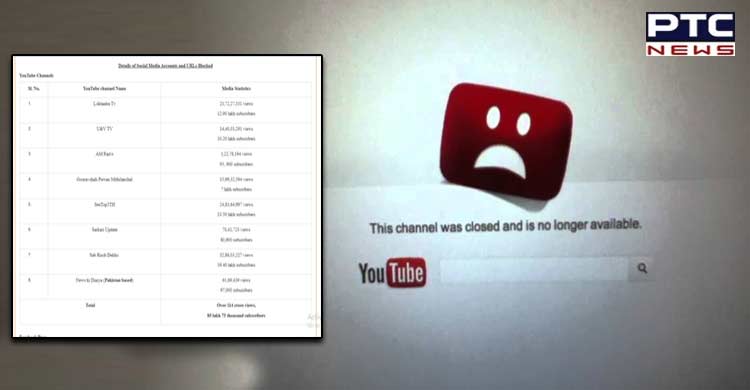 New Delhi, August 18: The Ministry of Information & Broadcasting on Thursday ordered the blocking of eight YouTube channels, including one operating from Pakistan, for allegedly spreading disinformation related to India's national security, foreign relations and public order.

According to the statement released by the Minister, the blocked YouTube channels had over 114 crore views, 85.73 lakh subscribers and the content was being monetised.

Seven Indian news channels are among the channels that were blocked in accordance with the Information Technology Rules-2021.

"Such content was found to have the potential to create communal disharmony and disturb public order in the country," it added.

The Ministry of Information & Broadcasting further said the YouTube channels were also used to post fake news on various subjects such as the Indian Armed Forces and Jammu and Kashmir.

"The content was observed to be completely false and sensitive from the perspective of national security and India's friendly relations with foreign States," it read.

"The content blocked by the Ministry was found to be detrimental to sovereignty and integrity of India, security of the State, India’s friendly relations with foreign States, and public order in the country. Accordingly, the content was covered within the ambit of section 69A of the Information Technology Act, 2000," the statement read.

Further, the statement said that blocked Indian YouTube channels were using fake and sensational thumbnails, images of news anchors and logos of certain TV news channels to trick viewers into thinking the news was real.