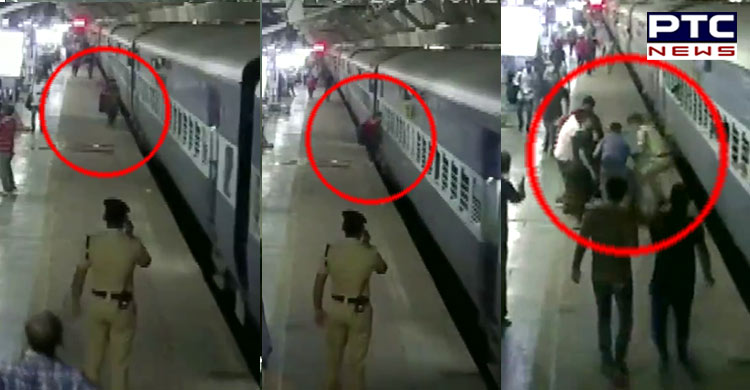 Gujarat: A Railway Protection Force (RPF) Jawan on Thursday, saved a woman who fell off the platform as she tries to board the train at Ahmedabad Railway Station. The video is showing the heroic move of the Railway Protection Force (RPF), how brilliantly he handled the situation and dodge the mishappening. The women were at the stage where anything could have happened, but the RPF soldier, was there on round and he quickly responded and pulled the woman back.

In a video, the woman is seeing boarding the train with some luggage in the hands and stumbles with the train as it moves on. The woman then falls near the doorstep and then the nearby people rushes to the women, while a Railway Protection Force (RPF) soldier was in radar as well. The RPF soldier rushed to the women and pulled her in a heroic way.

The video is making rounds on the Internet lauding the heroic work of the Railway Protection Force (RPF) soldier, who on duty proved his worth by saving a life. Earlier, one such video erupted from Mumbai, where a railway official saved a man in a heroic way, where the man was so lose to the death.