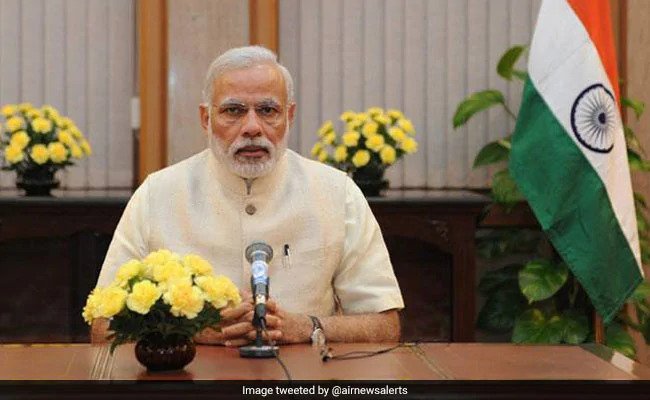 In his 58th 'Mann Ki Baat' radio address, Prime Minister Narendra Modi on Sunday paid respects to Guru Nanak Dev saying he has not only influenced people in India but the entire world.

Prime Minister Modi said, "On November 12, the 550th Prakashotsav of Guru Nanak Dev Ji will be celebrated. Guru Nanak Dev has not only influenced India but the entire world. Our Sikh brethren are settled in different countries and they are devoted to the ideals of Nanak."

"There is much about Guru Nanak Dev Ji that I can share with you, but it will require many episodes of Mann ki Baat. I can never forget my visit to Gurudwaras in Vancouver and Tehran," he said.

"Guru Nanak Dev always put 'Sewa' (service) on priority. He believed that selfless service is priceless. He stood against the practice of untouchability. He propagated his message to every corner of the world," he said.

The prime minister said that Guru Nanak Dev was one of the most travelled people of his time. With his modesty and humility, he won hearts wherever he went.

"Guru Nanak Dev also undertook several spiritual journeys which are called 'Udasis' in which he met various saints and 'Rishis'. It is believed that Shankardev, a saint in Assam was influenced by him. Guru Nanak Dev also went to Haridwar. In Varanasi there is Gurubagh Gurudwara, it is said that Guru Nanak Dev stayed there once. He had also visited Rajgir and Gaya, which are associated with Buddhism," Modi said.

"In the South, Guru Nanak Dev travelled to Sri Lanka. In Karnataka's Bidar, he solved the issue of water crisis. There is a place called Guru Nanak Jeera Saheb in Bidar which is dedicated to him and it reminds us of him. During an 'Udasi', he went to Kashmir which established a strong bond between the Sikhs and Kashmir," he added.

"Guru Nanak Dev also went to Tibet. He is also prayed in Uzbekistan. He also travelled to Islamic countries such as Saudi Arabia, Iraq and Afganistan. Nanak resides in millions of hearts who follow his teachings," the prime minister said.

"It is my desire that the 550th Prakashotsav of Guru Nanak Dev Ji inspires us to inculcate his thoughts and principles in our lives. I once again bow to pay respects to Guru Nanak Dev Ji," he added. (ANI)