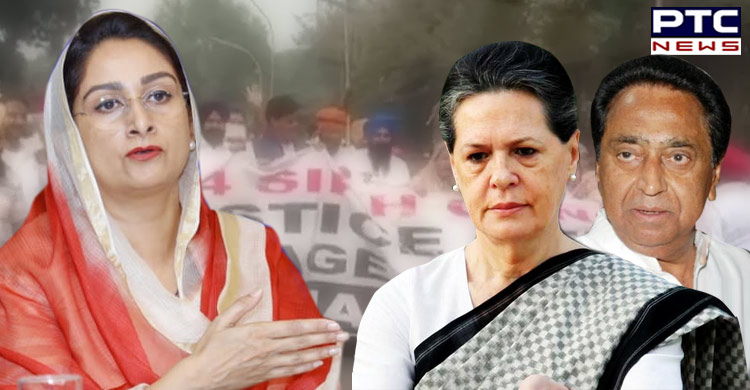 In a statement here, Badal said it was shocking that Sonia Gandhi had opted to remain silent after the Special Investigation Team (SIT) decided to reopen a case involving killing of two Sikhs in Gurdwara Rakabganj in Delhi in which the Madhya Pradesh Chief minister was accused of leading the mob. “The silence of the Congress President as well as the entire Congress party is in line with the continuous shelter and even rewards given to the 1984 massacre culprits by the party.

It seems Gandhi is also bent on following the same line of protecting the culprits as taken by her son Rahul Gandhi earlier. She has chosen to stand with Kamal Nath who is accused of leading a mob which attacked Gurdwara Rakabganj by two independent witnesses instead of listening to the voice of the Sikh community which has been fighting for justice in the case for 35 years”.

Harsimrat Badal said the Congress party had adopted a policy to protect and shelter its leaders who had led mobs which had ransacked Sikh properties and Gurdwaras and indulged in gruesome killings in 1984 after Rajiv Gandhi justified the killings by stating “jab bada ped girta hai to dharti hilti hai”. She said Rajiv’s son Rahul Gandhi continued this policy as Congress President by stonewalling the truth by stating that no Congress leader was involved in the mass killings of Sikhs in 1984. “Now Sonia Gandhi is continuing with this policy by extending her full support and patronage to Kamal Nath”, the Union minister added.

Giving further details, the union minister said former Indian Express journalist Sanjay Suri, who was a witness to the attack on Gurdwara Rakabganj, said he saw Kamal Nath controlling the mob and that he was present on the spot when the mob charged at the gurdwara. She said Suri also deposed that the police force present on the spot stepped aside and did not try to prevent the mob from indulging in arson and murder.

Badal said similarly another eye witness Mukhtiar Singh had also deposed before the Nanawati Commission and stated that after retreating briefly the mob came in force to attack Gurdwara Rakabganj and that he saw Kamal Nath and Vasant Sathe leading the mob. She said Mukhtiar Singh also deposed that both Congress leaders even instructed the police to fire several rounds at Gurdwara Rakabganj and that the marks of the gunshots were still visible on the gurdwara facade.

The Union Minister said now both witnesses had been given an opportunity to record their statement before the SIT which would pave the way for including Kamal Nath’s name in the FIR registered in the Parliament Street police station and his subsequent arrest and trial. “The wheels of justice have started moving in the case and the time is not far when Kamal Nath will be awarded exemplary punishment as per the law for his crimes against the Sikh community and humanity”, Badal added.