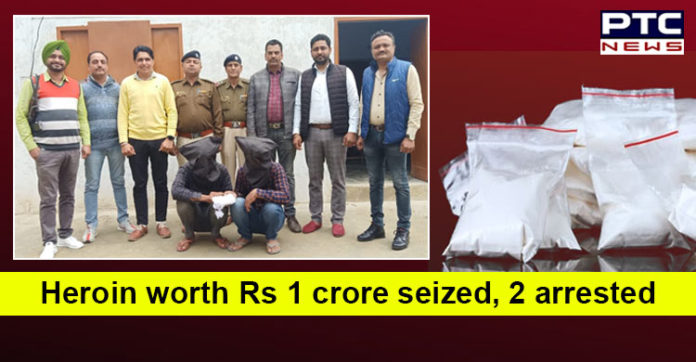 As a part of the special anti-drug drive, the Haryana Police on Wednesday seized 500 grams of heroin from a car in district Sirsa and arrested two persons in this connection. The estimated market value of the seized drugs is around Rs one crore.

While giving information, a spokesperson of Haryana Police said that the arrested accused were identified as Ramandeep Singh alias Sona, a resident of Sahuwal and Pragat alias Kaka, a resident of Raghuana. The crackdown was made by a team of the Crime Investigation Agency after it received inputs about the same.

During the initial investigations, it has been revealed that the arrested accused had brought a seized contraband from the national capital to supply it in Kalanwali, Odhan and Punjab area. Meanwhile, a case had already registered against the accused Pragat Singh at Police Station Lambi, district Muktsar, Punjab under Narcotic Drugs and Psychotropic Substances (NDPS) Act.

He further said that after getting a secret input about drug smuggling, a CIA team started checking vehicles at a Naka near Ding mor. When the police team signaled an i20 car coming from the Fatehabad side to stop for checking, the driver tried to flee away, but the police nabbed them. Upon searching, 500 gram of heroin was recovered from their possession.

Meanwhile, the accused will be taken to remand by producing them before the court so that the name of others involved in the racket of drug peddling could come out.

In another case, the police in Fatehabad has arrested two persons identified as Gaija and Gurjeet alias Geetu on the charges of possessing 18 kg 200-gram ganja. Both of them were booked under the NDPS Act while further investigation is underway.