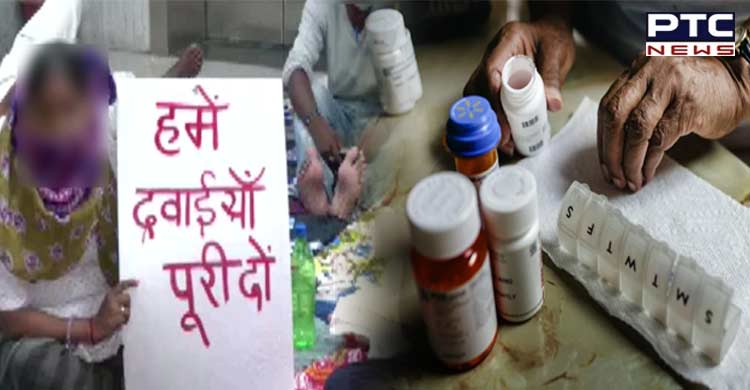 New Delhi, July 26: A group of HIV patients on Tuesday protested outside the National AIDS Control Organization's (NACO) office in Delhi against the shortage of crucial life-saving drugs required to curb the disease.

The protestors held placards stating that patients should have access to essential medications.

"We are not able to access life-saving, crucial drugs that we need to consume regularly for the treatment. For the last five months the drugs are not available in Delhi as well as neighbouring states, " said Harishankar Singh, a patient.

He further revealed that the HIV-positive patients had written to authorities about the issue but to no avail.

Another HIV patient Anitosh said, "There has been a stockout and shortage of very essential HIV medicines for quite some time. If such a situation persists, how could India achieve its goal to be a completely HIV-free nation by 2030?"

National AIDS Control Organization (NACO) is the central agency responsible for providing medicines, diagnostic kits and training needed to treat patients infected with HIV. Meanwhile, the agency has initiated a round of discussions following the ongoing protests.

"After persuasion by NACO and with active cooperation of national networks of persons living with HIV (PLHIV), four representatives of the protestors had a round of discussion with senior officers of NACO today afternoon," a source stated.

Officials claimed that they also notified the patients about the accessibility of the essential medications.

"They were informed about the position regarding drug availability and they were told to jointly work with state AIDS control societies and NACO for the availability of drugs at those few centres which were running short on supplies, temporarily," sources added.