While the Netherlands men recorded a win, it was a double for the hosts Argentina in  the FIH Pro League. Last weekend not only the men’s team with Spain  but also the national teams of New Zealand, both men and women,  suffered defeats on their away games.

In the men’s competition, the Netherlands thrilled the home fans with a 4-0 victory over Spain in Rotterdam, avenging the shoot-out defeat it suffered in the reverse fixture earlier this year in Valencia. Spain was outstanding in the first half, but goals from Roel Bovendeert, Mirco Pruijser, Lars Balk and Arjen Lodewijks ensured a Dutch win. The Netherlands ended the day sitting sixth in the standings having claimed 50 percent of the available points, with Argentina’s men climbing to fourth place thanks to a narrow 4-3 success over New Zealand in Rosario.

Also in Rosario, Argentina’s women team continued its remarkable winning streak by beating New Zealand 3-1. It was a sixth consecutive FIH Pro League victory for Las Leonas, who have now beaten the Black Sticks twice in this competition. Argentina move level with Netherlands at the top of the standings, having claimed 83.3 percent of the available points to date.

The day’s play began with a fascinating fixture at a packed H.C. Rotterdam, as the Netherlands men (FIH World Ranking: 3) faced Spain (WR:9), a side that were dismantled 7-3 by world champions Belgium in Brussels earlier this week. Despite that heavy defeat, it was Spain’s Red Sticks who had the better chances in the opening two quarters, with the exceptional Enrique Gonzalez forcing two important saves from Dutch shot-stopper Sam van der Ven. The Oranje – who were defeated by Germany 1-0 in their last FIH Pro League encounter, just over one month ago – were well below their best, but came close to opening the scoring in the moments before half time when Bob de Voogd tested Spain goalkeeper Quico Cortes before Thierry Brinkman had a goal ruled out due to back stick.

The Netherlands exploded out of the blocks in the third quarter, scoring two unanswered goals to settle nerves of the partisan crowd. Roel Bovendeert fired into an unguarded net after Spain failed to deal with a dangerous pass into the circle, with the advantage being doubled by a rocket strike from Mirco Pruijser, rattling the Spanish backboard with unerring accuracy and incredible power.

A victory for the Netherlands was confirmed with another two goals in the final quarter, with Lars Balk volleying home a penalty corner rebound ahead of a first international goal for Arjen Lodewijks, firing in a backhand strike from the top of the circle to seal a 4-0 triumph.

Reflecting on the game, Player of the Match Mirco Pruijser said: “It was a great atmosphere. We were a bit lazy at the start of the game, I think. But in the second half we put up the energy level and you could see what happened, we created more chances. We are very satisfied, 4-0 at home is always good.” 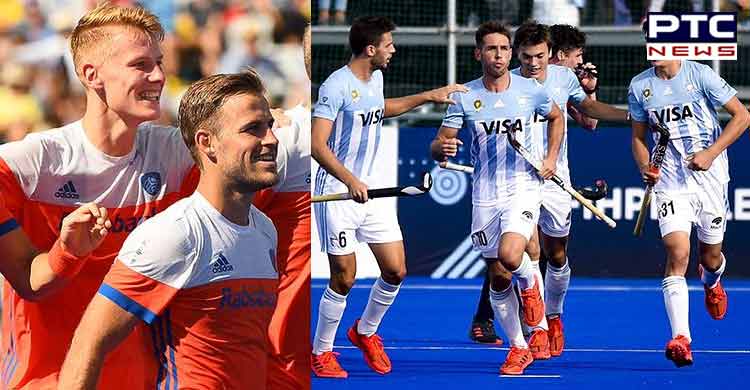 The FIH Pro League action immediately switched from Rotterdam to the Argentinean city of Rosario, where the hosts welcomed the national teams of New Zealand. The women’s teams were the first to take to the field, with Las Leonas (WR:3) dominating the visiting Black Sticks (WR:6) throughout the opening period. New Zealand improved in the second period and silenced home fans when team captain Stacey Michelsen scored from close range after Olivia Merry saw two penalty corner efforts blocked. However, the Argentinean supporters crammed into the Estadio Mundialista were soon back on their feet when Agostina Alonso’s speculative cross-shot somehow found its way into the New Zealand goal, restoring parity ahead of half time.

Argentina’s Maria Granatto had the best chance of the third quarter, gliding past New Zealand goalkeeper Grace O’Hanlon and firing towards an unguarded net only for Black Sticks defender Frances Davies to dive at full stretch to produce a miraculous goal-line clearance. However, Argentina got the win that their hard work deserved with two goals in the final quarter. Julieta Jankunas scored the best goal of the game, firing into the top left corner with a superb backhand strike before Eugenia Trinchinetti sealed all three points with a driving run and slap-shot.

“Three wins [for Argentina in Rosario] is very important”, said Player of the Match Trinchinetti after the game. “We are not thinking about ‘the final four’, the team has to grow and play better every game. We have to train a lot and today we have to celebrate because it is very important to win and to be here in Rosario with our families.”

It took less than two minutes for the opening goal to arrive in the men’s match between Argentina (WR:4) and New Zealand (WR:8), with the hosts opening up an early advantage from 37-year-old striker Matias Paredes, who pounced after two saves from Black Sticks shot-stopper Richard Joyce. A penalty stroke from Maico Casella coupled with Martin Ferreiro’s cool finish put the home favourites 3-0 up before goals either side of the quarter time break from Sam Lane saw New Zealand take the score to 3-2. New Zealand were in the ascendency, but it was Argentina made it 4-2 just before half time when Joyce was caught out of position, with Frederico Fernandez firing home.

New Zealand pulled a goal back in the final quarter when George Muir found the roof of the Argentina net, but the home side held on to take the win.

“We played really bad last week [5-1 defeat at home against Great Britain], so we really needed this win”, said Player of the Match Matias Paredes. “We are happy, but we still need to continue improving. We are not playing good. Today we won, but we need to train more and create our team again.”