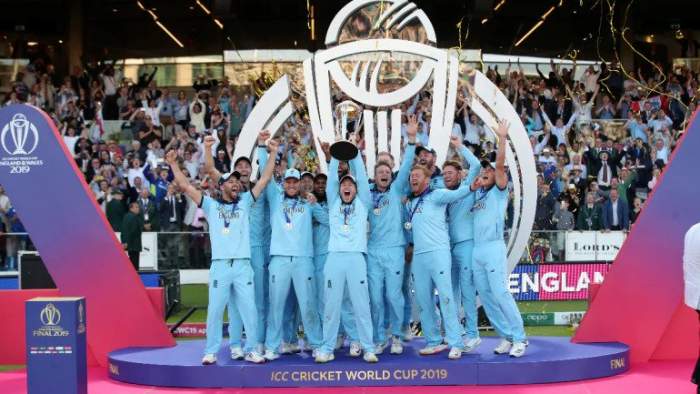 The ICC Men's Cricket World Cup final witnessed a first-ever super-over in which England came out triumphant as they had scored more boundaries in the match to lift their maiden 50-over World Cup on Sunday at Lord's Cricket Ground.
The winner could not be decided as both the normal 50 overs and super-over action ended up in a tie. In the super over, England scored 15 runs and they were able to restrict New Zealand to 15 runs, and they won the match as they had scored more boundaries in the match.
In the 50-over spell, both England and New Zealand registered scores of 241.
Chasing a below-par target of 242, opener Jason Roy and Jonny Bairstow started scoring for England.
Roy (17) built a 28-run brief stand with Bairstow before he was caught behind the stump by Tom Latham in the sixth over. Matt Henry struck early for New Zealand.
Joe Root came to bat at number three and he along with Bairstow, stitched a 31-run partnership. Root (7) searched for the release shot and instead edged de Grandhomme behind in the 17th over. Tom Latham ended up taking a simple catch.
Bairstow, too, failed to leave a mark and departed in the 20th over to Ferguson. He played a knock of 36 runs.
English skipper Eoin Morgan joined Ben Stokes in the middle. In the 24th over, Morgan (9) was sent back to the pavilion by Jimmy Neesham, thanks to a brilliant catch by Ferguson at point boundary.
England were at 86 for four in 23.1 overs and still required 156 runs to lift their maiden World Cup title.
Jos Buttler and Ben Stokes retrieved the innings and the duo cautiously put England as the firm favourite. They built a 110-run partnership before Butler was dismissed by Ferguson in the 45th over.
England needed 24 runs from the last 12 balls. Stokes kept playing aggressively, but nobody was able to support at the other end. With 15 runs required off the last over, England had the rub of the green going their way as Martin Guptill's throw went to the boundary, giving England four runs due to an over-throw. But New Zealand managed to keep their nerve to take the match into the super over.
Earlier, New Zealand skipper Kane Williamson won the toss and choose to face the aggressive English bowling line-up first.
Kiwis could not get the desired start as they lost Guptill early in the seventh over of the innings. Chris Woakes caught Guptill in front of the wickets and sent him back to the pavilion. Although Guptill (19) took a DRS as he was not convinced with the on-field umpire's decision, the third umpire stayed with the ground umpire's decision.
Henry Nicholls with Kane Williamson tried to build the innings and kept the scoreboard moving. By the end of 10 overs, New Zealand were at 33 runs for the loss of one wicket.
Williamson and Nicholls stitched a 74-run stand before the latter was caught behind the stumps by Jos Buttler in the 23rd over. Liam Plunkett got rid of Kiwi skipper Williamson (30) as the scoreboard showed 103.
Ross Taylor joined Nicholls in the middle and helped him to get a half-century off 71 balls in the 25th over. Shortly after, Plunkett bowled Nicholls (55) on the back of a length ball in the 27th over.
England bowlers send the Kiwis top-order back to pavilion without scoring many runs. Taylor and Tom Latham stitched a brief stand of 23 runs before the former was dismissed by Mark Wood in the 34th over. Taylor added 15 runs to the team's total.
Neesham came in to bat at number six and built a partnership of 32 runs with Latham. Neesham was caught by Joe Root on mid-on in the 39th over, giving Plunkett his third wicket of the match.
Latham and Colin de Grandhomme guided the team past 200 runs. The duo built a partnership of 46 runs before Grandhomme was caught on mid-off by substitute James Vince.
Later, Latham departed in the 49th over at 47. However, New Zealand's tailenders added some more runs and the innings ended with a score of 241 runs in 50 overs.
For England, Woakes and Plunkett took three wickets each.
Brief scores: England 241/10 (Ben Stokes 84*, Jos Buttler 59, Lockie Ferguson 3-50) and New Zealand 241/8 ( Henry Nicholls 55, Tom Latham 74, Chris Woakes 3-37)
Super Over score: England 15/0 and New Zealand 15/1. (ANI)