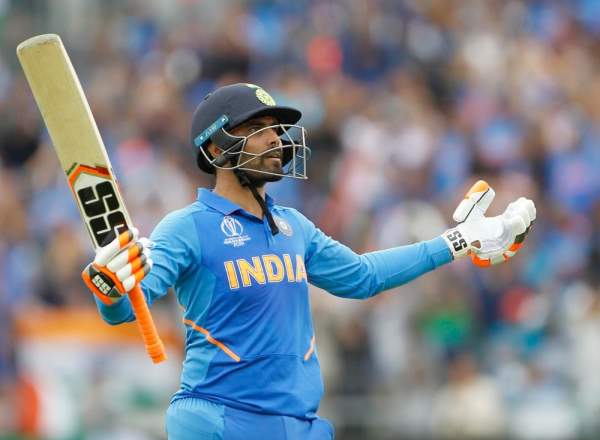 Former Indian cricketer Sanjay Manjrekar, who was subjected to criticism for calling Ravindra Jadeja a 'bits and pieces cricketer', finally praised the player for his all-round performance against New Zealand in the semi-final of the ongoing ICC Men's Cricket World Cup on Wednesday.

Jadeja displayed an all-round performance against the Kiwi side as he played a knock of 77 runs and went on to take one wicket.

Jadeja came out to bat when India was in a spot of bother at 92/6. He steadied the innings along with wicket-keeper batsman MS Dhoni as the duo stitched together a partnership of 116-runs.

The left-hander was finally dismissed by Trent Boult in the 48th over. Jadeja hit four fours and four sixes in his innings.

But his exploits were not enough as the Men in Blue lost by 18 runs.

Manjrekar had told media that he is not a big fan of bits and pieces players like Jadeja. The statement did not go well with the all-rounder and Jadeja in a tweet said he has played twice the number of matches than Manjrekar.

Still i have played twice the number of matches you have played and i m still playing. Learn to respect ppl who have achieved.i have heard enough of your verbal diarrhoea.@sanjaymanjrekar

"Still I have played twice the number of matches you have played and I m still playing. Learn to respect ppl who have achieved.i have heard enough of your verbal diarrhoea. @sanjaymanjrekar," Jadeja had tweeted.

In pursuit of 240, Virat Kohli, Rohit Sharma, and KL Rahul all scored just one run and this is the first time in the history of cricket that the first three batsmen of any team were dismissed for one run.

Sharma and Rahul were dismissed by Mark Henry whereas Kohli was sent back to the pavilion by Trent Boult. Their dismissals restricted to India to 5/3. Dinesh Karthik (6) also failed to leave a mark and his dismissal pegged India back at 24/4.

Rishabh Pant and Hardik Pandya stitched together a partnership of 47-runs but their resistance ended as Pant (32) was sent back to the pavilion by Mitchell Santner.

Pandya also departed after playing a knock of 32 runs as he was dismissed by Santner.
Earlier, the tail-enders dragged New Zealand to post 239 for the loss of eight against India in the first semi-final of the ICC Men's Cricket World Cup at Old Trafford on Wednesday.

Picking up from where they left a day after rain halted the match, New Zealand added 28 runs to the scoreboard to finish their 50-over quota.

For India, Bhuvneshwar was the pick of bowlers as he returned with three wickets in his 10 overs quota and gave away just 43 runs. (ANI)