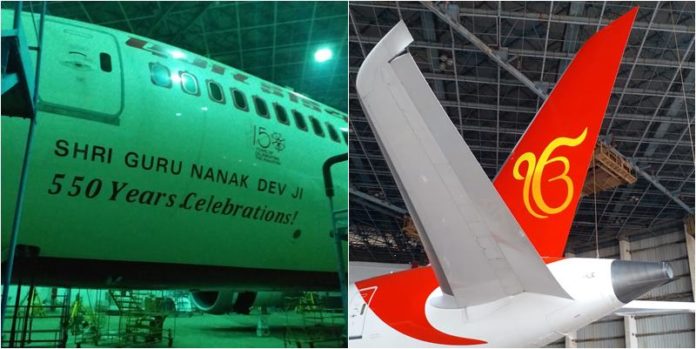 Ahead of the celebrations of 550th Birth Anniversary of Sri Guru Nanak Dev Ji, Air India has painted ‘Ik Onkar’ on the tail of its Boeing 787 Dreamliner.

Punjab Chief Minister Captain Amarinder Singh on Monday shared photos of the aircraft and appreciated Air India’s initiative. He said in his tweet: “Heartwarming to see Ik Onkar’ painted on the tail of Air India’s Boeing 787 Dreamliner as part of the historic celebrations of the 550th Prakash Purb of Sri Guru Nanak Dev Ji.”

Ik Onkar is a first word of Gurbani which means, “God is One”. It symbolises the emblem of the Sikh religion and is usually found on Gurdwaras across the world.

Boeing 787 Dreamliner aircraft is among the top end model which is flown by Air India, commonly used on long-haul routes.

Meanwhile, the Air India CMD Ashwani Lohani said that “there was a high demand to launch a direct flight connecting Amritsar and London. It was a great opportunity to launch it on the 550th birth anniversary of Guru Nanak Dev Ji.”