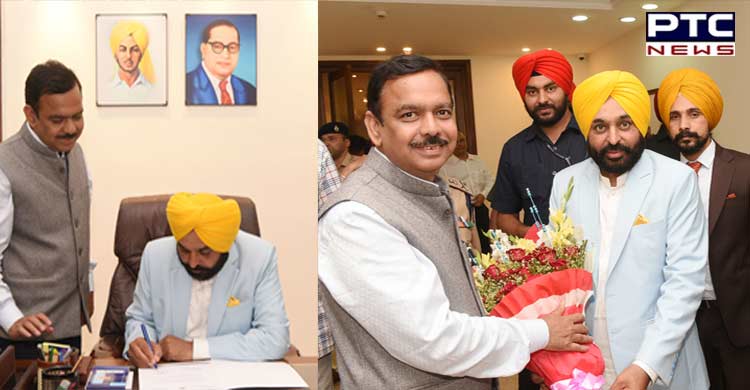 Chandigarh, March 16: Punjab Chief Minister Bhagwant Mann on Wednesday assumed the charge of his office in the Chief Minister Office at the Punjab Civil Secretariat this afternoon after taking oath at Khatkar Kalan, the ancestral village of freedom fighter Bhagat Singh.

Soon after taking the charge of his office, Bhagwant Mann in a short but clear message to the officers and employees present on the occasion said the people of the state had given a historic mandate and his government would work for pro-people policies. The Chief Minister also assured the officers and employees would work in tandem for the betterment of the lives of the people.

Kejriwal, in a tweet, expressed confidence that under Mann's leadership, prosperity will return to Punjab. "Many many congratulations and best wishes to Bhagwant Mann on becoming the Chief Minister of Punjab. I am sure that under your leadership, prosperity will return to Punjab. There will be a lot of progress and people's problems will be solved. God is with you," tweeted Kejriwal in Hindi.