The 35-year-old five-time world champion and Olympic bronze-medallist was competing in her debut Commonwealh Games, also perhaps her last, and made it a memorable one with yet another dominating performance to claim an unanimous verdict of 5-0. 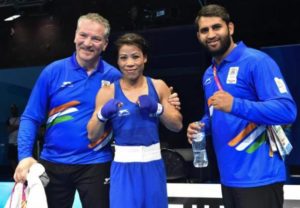 The 22-year-old O'Hara, who works as a carer at a nursing home when she is not trading punches in the ring, lacked the finesse to counter the experienced Indian and failed to take advantage of her longer reach.

Mary Kom struck her at will, her right hooks being especially telling. By the second round, Mary Kom seemed to be thoroughly enjoying herself in the ring against her timid rival.

Mary Kom had claimed the Asian Championships gold five months ago, before ensnaring the top honours at the India Open in January. She had won a silver medal at the Strandja Memorial Tournament in Bulgaria before coming here. PTI