India vs Bangladesh 1st Test: India wins by an innings and 130 runs 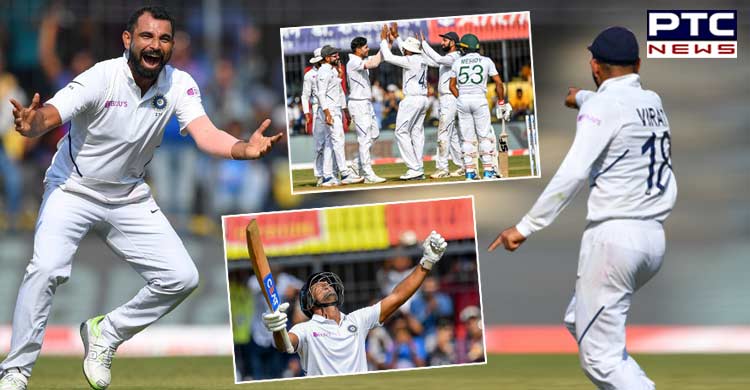 India vs Bangladesh 1st Test: India defeated Bangladesh by an innings and 130 runs in the first Test match of the two-match Test series at Indore on Saturday. Mayank Agarwal has been named Man of the Match for his magnificent double hundred in the first innings. He scored 243 runs off 330 balls including 28 boundaries and six sixes.

Following on, Bangladesh was dismissed for 213 runs in its second innings after India declared its innings closed at overnight score of 493. Mohammed Shami took 4 wickets, Ravichandran Ashwin bagged three wickets, while Umesh Yadav and Ishant Sharma took 2 and 1 wicket, respectively. For Bangla Tigers, Mushfiqur Rahim was the only man who played for long. Rahim scored 64 runs off 150 balls.

However, Virat Kohli couldn't score a run, but he led the side using his bowlers as a weapon. In the first innings, India restricted Bangladesh to 150 runs. In first innings, Mohammed Shami took 3 wickets, while Umesh Yadav, Ishant Sharma and Ravichandran Ashwin bagged two wickets each.

Meanwhile, Mayank Agarwal joined the elite list of Indian batsman outscoring opposition in each inngs. Virat Kohli in a post-match presentation said, "I don't really know what to say. Clinical performances all around. The team is playing really well. I can't say something which people are not seeing on TV. Fast bowlers are at the top of their game. It's a dream bowling combination for any skipper."

Winning three consecutive Tests by a margin of inngs & 100+ runs

Last six away Tests for Bangladesh

Most innings wins for an Indian captain