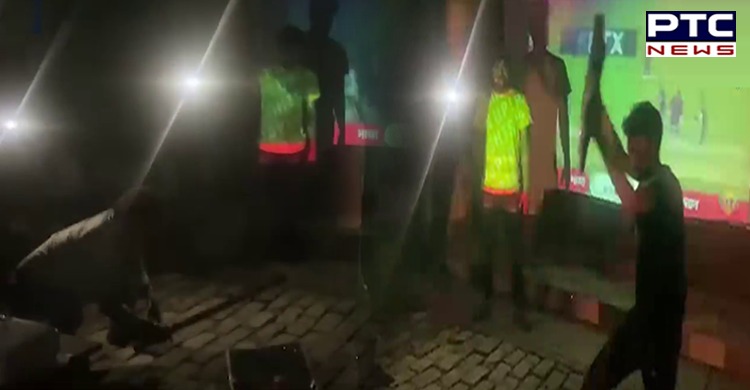 India vs Pakistan 2021: After Pakistan defeated India in its opening match of ICC T20 World Cup 2021 on Sunday, some of the Indian cricket fans were so upset that they broke the TV sets as soon as the match finished.

Pakistan defeated India for the first time in World Cup events since 1992. While Men in Green restricted Men in Blue at 151-7, Pakistan won the match by 10 wickets. It was indeed a historic moment for Pakistan as this performance will be registered in history.

Meanwhile, Indian cricket fans from Bihar broke TV sets as they were upset about India's performance in T20 World Cup 2021 against Pakistan.

People from across India were preparing for the match since Sunday morning. While projectors were installed at some places, people had also planned to watch the match on the TV set itself. Several people even organised hawan and puja for India's success in the high-voltage match against Pakistan.

Therefore, it was hard for the Indian fans to see India's 'embarrassing' defeat against Pakistan in a World Cup match. The youth who were watching the match in front of TV sets go furious and broke them.

Mohammad Rizwan and skipper Babar Azam put on a remarkable show on Sunday as Pakistan thrashed India by 10 wickets in their opening game of the ICC T20 World Cup 2021 at the Dubai International Cricket Stadium.

Rizwan (79*) and Babar (68*) didn't give any chance to India bowlers to come on top as the two batsmen dominated the proceedings. Pakistan chased down the target of 152 without losing a wicket as India looked clueless in their opening match.

Before this game, Pakistan had failed to beat India in the history of the men's World Cup but the Babar-led side came out with flying colors on Sunday on the back of some sensational performance after Shaheen Shah Afridi's show with the ball.