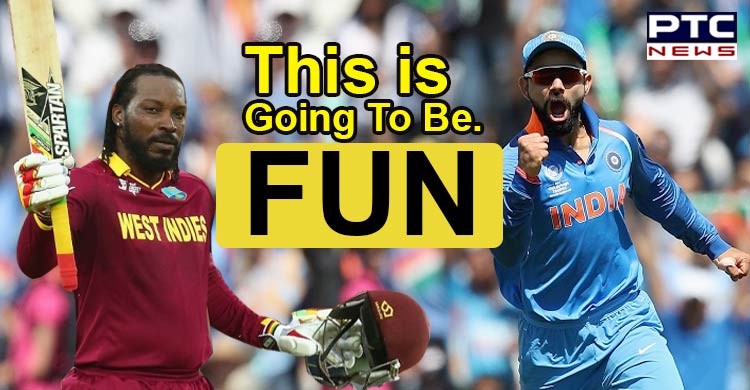 India vs West Indies 1st ODI: After clinching victory in T20 series, Virat Kohli and squad is all set to move ahead in the 1st ODI out of the three-match ODI series. However, now the competition is going to be a bit tough as the monster Chris Gayle is making a comeback in the ODI series. The first ODI match is set to be played at Providence Stadium, Guyana at 7:00 PM (Indian Standard Time). Chris Gayle was struggling with his form in ICC Cricket World Cup 2019, but remember West Indies vs England, 4th ODI, where the hunter smashed 162 runs off just 97 balls.

In the same series, during the England Tour of West Indies, Chris Gayle in an ODI series opener, smashed 135 runs off 129 balls, though they lost the match. Likewise, in the second ODI against England, he hammered, 50 runs off 63 balls. Third ODI was abandoned by the rain and hence in the final ODI, he scored 77 runs off just 27 balls. Also, Chris Gayle was awarded as the Man of the Series. Now, Chris Gayle will be back in the yard, however, he was speculated to be retiring from the ODI cricket.

Virat Kohli on the other side is moving on forgetting the innings played in the semi-final of ICC Cricket World Cup 2019 against New Zealand, where he went to the pavilion after soft-dismissal. The skipper has shown trust in his troops as the Navdeep Saini who shined in the T20 series against the West Indies.

Now, it's about the ODI series, and therefore, the run-machine will eye towards the same. Definitely, the match is going to be the high-voltage match as the West Indies, despite loses in CWC 19, has shown some phenomenal strength.