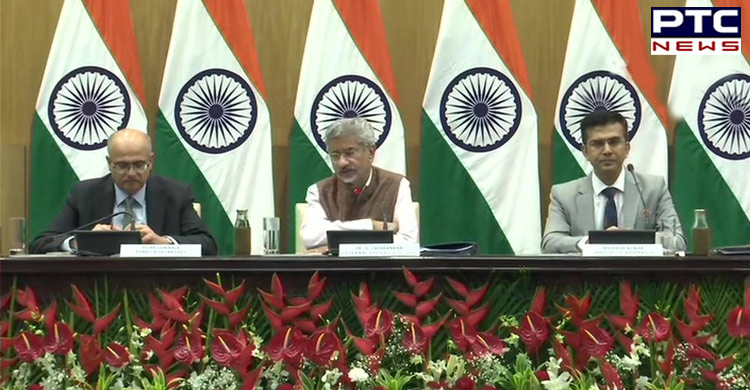 External affairs minister Subrahmanyam Jaishankar, on Tuesday, addressed the media on completion of the first 100 days of his ministry and said that India’s voice has grown stronger on the world stage. He said, “I think if you look at the big debates on multilateral forums - G20, BRICS, you will see that the Indian voice, Indian views are heard much more clearly.”

Briefing the media, Jaishankar said, “There is a strong link between domestic and foreign policy. The co-relation between our national policy goals and foreign policy goals has become stronger.” Commenting on the substantial influence of the diaspora, he said, “The diaspora is, of course, a unique aspect of our foreign policy. The event of the Indian-American community that is coming up in the United States is a case in point.”
The minister also said India is working on ties with African nations.

“We have been very active in Africa in the last 100 days. We are largely on track in terms of our African commitments. Work is underway to open 18 embassies in Africa.” Quoting the massive victory of PM Narendra Modi in Lok Sabha elections, S Jaishankar said this shows people’s faith in the government. He hailed the strong stance on issues like Article 370 and cross-border terrorism.”

Talking about India’s equation with the neighbours, he said, “We hope to build a better, stronger neighborhood while recognizing the fact that we have a unique challenge from one neighbor. Until the issue of cross-border terrorism is successfully addressed & that neighbor becomes a normal neighbor, that would remain a challenge.”

Jaishankar talked about relations with US and said, “India-US relations have come a long way, I assure you that relations are in very good health. As the relationship grows there will be issues. We've been talking to the US, my expectation is that the sharper edges will be addressed in the not too distant future.”