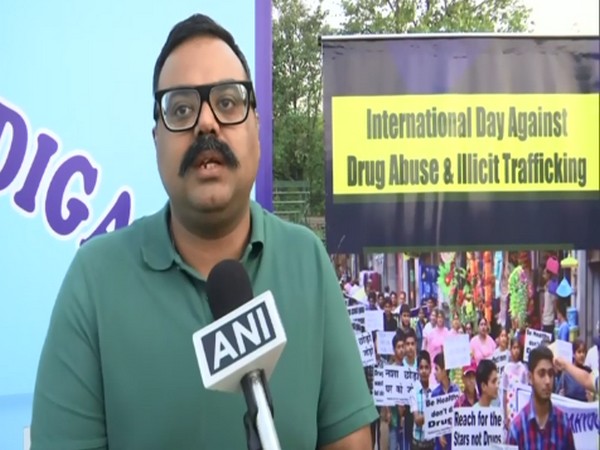 Amritsar, June 26: To raise awareness against drug abuse and trafficking, the Chandigarh unit of NCB and the local administration held a marathon in Amritsar and Ludhiana, respectively.

On the occasion of the International Day of Drug Abuse and Illicit Trafficking, the NCB held a number of programmes including in-house events like songs, drama and interaction sessions of the experts. According to the Zonal Director of Chandigarh NCB, the agency has conducted these Pan-India programmes since June 12.

"For this, the Chandigarh Zonal Unit of NCB started from Sukhna Lake in Chandigarh on June 12, in which 600 people participated and 2,000 people had arrived as spectators," said Amanjeet Singh, Zonal Director, Chandigarh NCB.

"On June 20, a Neon run was conducted in the city which was flagged off by governor Banwarilal Purohit. It was for the first time that any government organization had conducted it," he added.

The agency, along with the help of Chandigarh Police, later identified as many as 700 vulnerable children in the areas surrounding Chandigarh and organized a special Yoga programme for them on the occasion of Internation Yoga Day on June 21.

Later in the conversation, he informed that by the end of this evening, around 25,000 to 30,000 people will be made to take a pledge against the consumption of narcotics.
"Similarly a number of functions have been organized in the city, whereas in Amritsar today (on Sunday), the first run for public awareness was organized in which a number of people participated to join hands with the administration in the fight against drugs and narcotics," he said.

"This programme of Mini-Marathon has been organized under the administration of Deputy Commissioner of Ludhiana Surabhi Malik, in which the youth have actively participated, which proves that the city has enough enthusiasm to join hands in the fight against narcotics and they all want to be a part of this campaign," Dr Kaustubh Sharma, Police Commissioner, Ludhiana said.

Sharma also informed that today's programme involves several other programmes including expert talks, wherein, the experts will tell how can one avoid being drifted towards narcotics, and if already indulged in there, the programme will help one get rid of it.

"We want to make everyone aware that the administration is making every possible effort to break the supply of drugs and narcotics," he said.
Meanwhile, in Ludhiana, Deputy Commissioner Surabhi Malik said that they are happy as the people have gathered in huge numbers to participate in the anti-narcotics marathon, being jointly organized by the district administration and the police administration in Ludhiana.

"We want to tell that there is nothing above health and that narcotics kill the happiness of the family," Malik said.