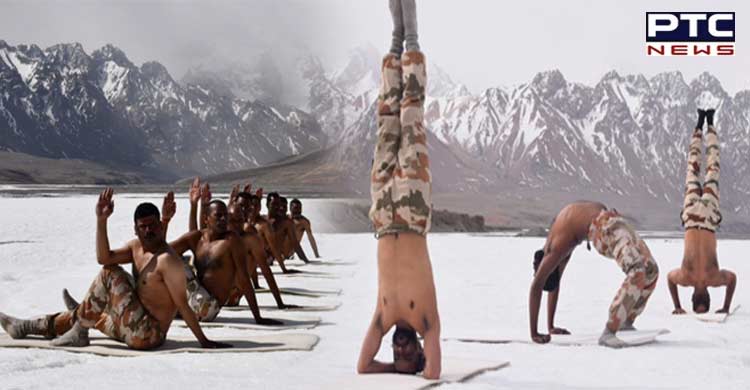 New Delhi, June 21: On the occasion of the 8th International Yoga Day on Tuesday, over 50,000 Indo-Tibetan Border Police (ITBP) personnel, known as 'Himveers,' performed Yoga in sub-zero temperature locations in the high-altitude regions of the Himalayas up to 19,000 feet starting from Arunachal Pradesh to Ladakh.

Meanwhile, the Yoga sessions were jointly participated by the personnel of the units of the force located in border areas and Chhattisgarh along with women personnel and their families.

ITBP troops participated in yoga exercises at the morning sessions on Tuesday, which also include locations in Ladakh and Sikkim at altitudes ranging up to 19,000 feet and sub-zero temperatures.

"Yoga was practised by ITBP jawans in Ladakh and Arunachal Pradesh in all the border units in snow, high altitude conditions and also in the rugged rain forests and river banks of Arunachal Pradesh," the ITBP informed.

In Arunachal Pradesh, the ITBP stated that a Yoga program with horses was organised at the force's Animal Transport School, Lohitpur, as well as the soldiers. The activities were also practised yoga in Left Wing Extremism hit areas of Chhattisgarh.

The ITBP stated that it has taken numerous steps to promote yoga, including performing yoga asanas on top mountain ridges in the Himalayas' higher peaks.

ITBP troops have been exceptional in promoting yoga by demonstrating Surya Namaskar and other yoga asanas at several high-altitude Himalayan ranges on India-China borders, including Ladakh, Himachal Pradesh, Uttarakhand, Sikkim, and Arunachal Pradesh in varied hilly terrains. On June 2 of this year, the ITBP set a new record by doing yoga at 22,850 feet near Mt Abi Gamin in Uttarakhand.