Its gifts raining on Indian leaders from Bangladesh PM 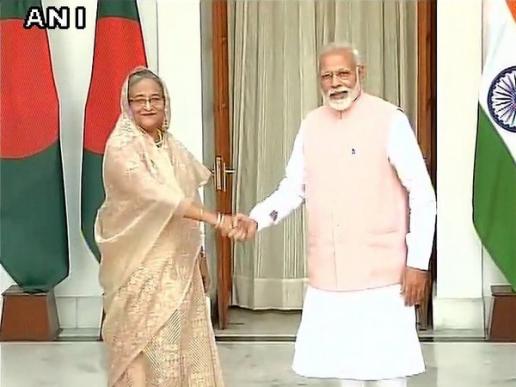 New Delhi: Bangladesh Prime Minister Sheikh Hasina, who is on a four-day-long state visit to India, has brought with her gifts for the Indian leadership, including the President and the Prime Minister.

Bangladesh Foreign Ministry sources were quoted by the Daily Star as saying that there was also a silk sari as gift for the Indian President's daughter Sharmistha Mukherjee.

She would also be presenting a dinner set, a leather bag, two kilograms of rosgolla and kalojam and one kilogram of sandesh to Indian Vice President Mohammad Hamid Ansari.

Prime Minister Hasina arrived in New Delhi on Friday to kickstart her four-day state visit to the country.

The two leaders are expected to hold official talks on a range of issues including an inter-governmental agreement on civil nuclear energy.

According to the Dhaka Tribune, India and Bangladesh may sign around 33 deals and Memorandums of Understanding (MoUs) on trade and commerce, economy and connectivity, and on defence related issues.