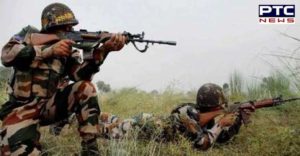 The militants opened a fire against the security forces, to which the Indian Army retaliated. In an exchange of fire between the militants and the security forces, the Army Jawan lost his life. Meanwhile, there are no more inputs of casualty on either side. Recently, Chinar Corps Commander Lt General K J S Dhillon and J&K DGP Dilbag Singh conducted a joint conference in which DGP said, “The overall number of active militants in the Valley & in the Jammu region has come down.”

Likewise, he also said, “We’re getting inputs that violence levels are likely to be increased by militants. So, we’ve tried to strengthen the grid on the ground. Also, we’ve been told that troops must get time to relax. This is the time for turnover. But the grid will be in as much active form as required”.