Kabir Singh actress Kiara Advani is the latest celebrity to fall victim to hacking. Advani’s Twitter account has been hacked but nothing inappropriate has been posted from her Twitter timeline so far, except for some suspicious links sent to her followers as DMs.
Kiara posted an Instagram story to inform her fans about the hacking.

She wrote, “My Twitter account has been hacked. We are working to get it back. Please ignore any unnecessary or strange tweets being posted. Please Do Not click on any suspicious link that is being sent from my Twitter account. My account is still hacked and this link has not been sent by me.” 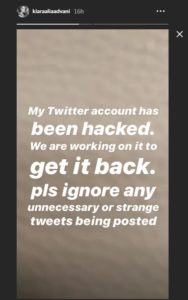 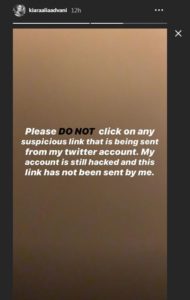 On the professional front, Kiara was last seen in Kabir Singh opposite Shahid Kapoor, which became one of the biggest blockbusters of 2019. She will now be seen in the forthcoming project, Laxmmi Bomb with Akshay Kumar, Bhool Bhulaiyaa 2 with Kartik Aaryan and Shershaah with Sidharth Malhotra.

Also Read: Confirmed! Kiara Advani to be roped in for Bhool Bhulaiyaa 2 opposite Kartik Aaryan

Incidentally, this is not the first case of a celebrity’s social media account being hacked. From Amitabh Bachchan to Shahid Kapoor, many actors have become victims of cybercrime.