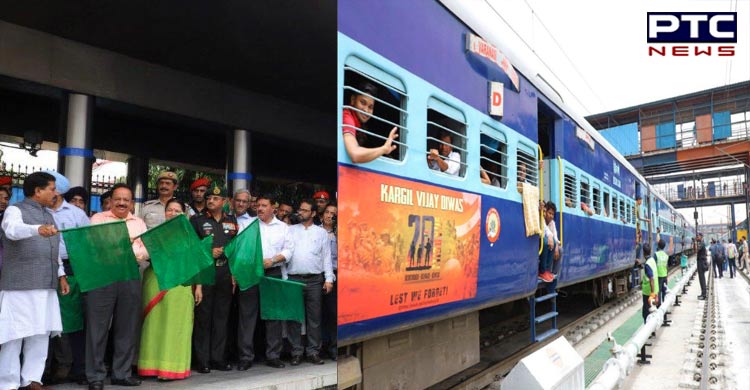 Kargil Vijay Diwas: Union Minister of Health and Family Welfare Harsh Vardhan on Monday flagged off a Vinyl wrapped train in an order to remember the sacrifices laid down by the brave soldiers of the Kargil War. Indian Railways have taken at initiative and launched several trains wrapped with vinyl and one such train was flagged off by the Union Minister Harsh Vardhan from the New Delhi Railway Station.

"The rakes (set of coupled coaches that move together) of the train are wrapped with vinyl posters which have 'Kargil Vijay Diwas' written on them and pictorial depiction of the bravery of Army personnel.", quotes ANI agency.

Likewise, Harsh Vardhan lauded the step of Indian Railways saying that they have done extraordinary work in the past couple of years. Also, the Union Minister said, that the whole nation is developing under the leadership of Prime Minister Narendra Modi.

Meanwhile, Union Minister Harsh Vardhan lauded the Indian Army and said that I bow in front of the Indian Army. The security forces have never let us down, be it any war". Adding on, the BJP's Meenakshi Lekhi was also present at the spot for paying tributes to the martyrs of Kargil War.